9261
Home > God is faithful in the midst of depression

God is faithful in the midst of depression 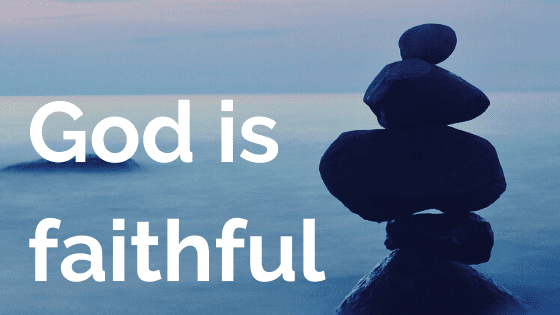 I was sitting in the chapel for morning worship at a theological college on the day of a job interview.

At home, my wife, Ali, had been suffering from severe depression for a couple of years, which had caused her to leave the job she loved as a church minister. She was improving very slowly, and it wasn’t clear how long her recovery would take.

During the service, the Old Testament reading included this: ‘I will restore to you the years that the swarming locust has eaten’ (Joel 2:25 RSV). I was astonished, for I had been puzzling over how God could bring anything good from the difficult situation we were in, and yet here was the prophet Joel telling the people of Israel that God would repay them for the ecological devastation which swarms of locusts had brought to their crops. If God could do that for them, then he could certainly restore Ali’s health.

That verse sustained me for the three or so years which followed, as Ali slowly recovered and was able to resume her role as a pastor. Incidentally, I got the job, and being there was part of Ali being able to recover through having opportunities to teach in the college—and that bore further fruit much later in her becoming a theological college lecturer herself, further evidence of God restoring ‘the years that the swarming locust has eaten’.

Read the stories collected about God’s faithfulness during lockdown here.

If you are a member of the Trinity community, past or present, share a story of God’s faithfulness from your life, so we can encourage each other: melissa.stratis@trinitycollegebristol.ac.uk.

This academic year, we are expanding the opportunities for both pioneers and those who wish to learn more about pioneer ministry. Currently, up to thirty-five students have participated in ‘input classes’, which are half-termly meetings, timed to coordinate with our dispersed learners’ block weeks. As they meet through Zoom, the group hears a seminar from […]
Read more

On New Year’s Eve, Trinity ordinand Sarah Lee invited her parents, brother, and children to join her and her husband (Trinity ordinand Jonathan Lee) via Zoom for a surprising piece of news. Sarah had been awarded a British Empire Medal from the Queen for services to the community in Oundle, Northamptonshire. Just prior to her […]
Read more

On Monday, Trinity’s Site Development Group chose a winner from among the five designers shortlisted to design our new student accommodation building. After the candidates made final virtual presentations, Bristol-based O’LearyGoss Architects was selected as the firm best suited to partner with Trinity on this project. ‘It has been a real honour to journey with […]
Read more