Meet our leavers: the Gaudion family

For five years, Craig and Gemma Gaudion were leading a Salvation Army church in Liverpool as lay ministers. ‘I’m third generation Salvation Army,’ says Craig, ‘and Gemma was a CAP centre manager. It will always be in our DNA to serve the poor, the broken.’ 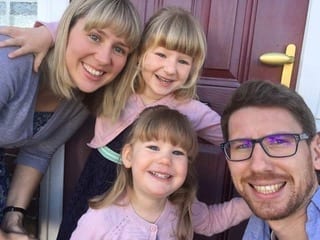 The couple was praying that God would direct them, as they ministered in one of the more deprived areas of Liverpool. ‘There was high unemployment, drug abuse, alcoholism. God put a heart in us for mission, to start a missional community in the neighbourhood. And people seemed to find a place with us–seniors, families, people who had never darkened the door of a church.’

At the time, Craig was being mentored by an Anglican vicar, who told him, ‘I could see you in the Church of England,’ a change Craig and Gemma had also been considering. The vicar put them in touch with a DDO, and in the end they joined the Church of England, and Craig was called through his BAP in 2016 to become ordained. Their Salvation Army church in Liverpool sent them to follow God’s calling with their support and blessing, and the couple and their two children moved to Bristol to prepare for ordination at Trinity College.

‘We came to Trinity because it’s a place where we as a whole family could flourish, and the community provided a benchmark for how we’d like to see community flourish in our ministry. As an introvert I can have a natural tendency to keep myself closed off, but the more I’ve been open to community, the more I’ve flourished. These have been some of the most healing, transformational years of my life. The way in which the academics, the experiential learning, the community all combine together—it’s provided the opportunity to take risks in a safe environment.’

Now, after their time at Trinity, Craig and Gemma will be returning to Liverpool as part of a Liverpool Diocese initiative called ‘Transform NorthWest’. ‘We will be developing what’s there, helping to see the areas and places we can reach out to, to help plant churches and develop momentum in areas currently unreached.’