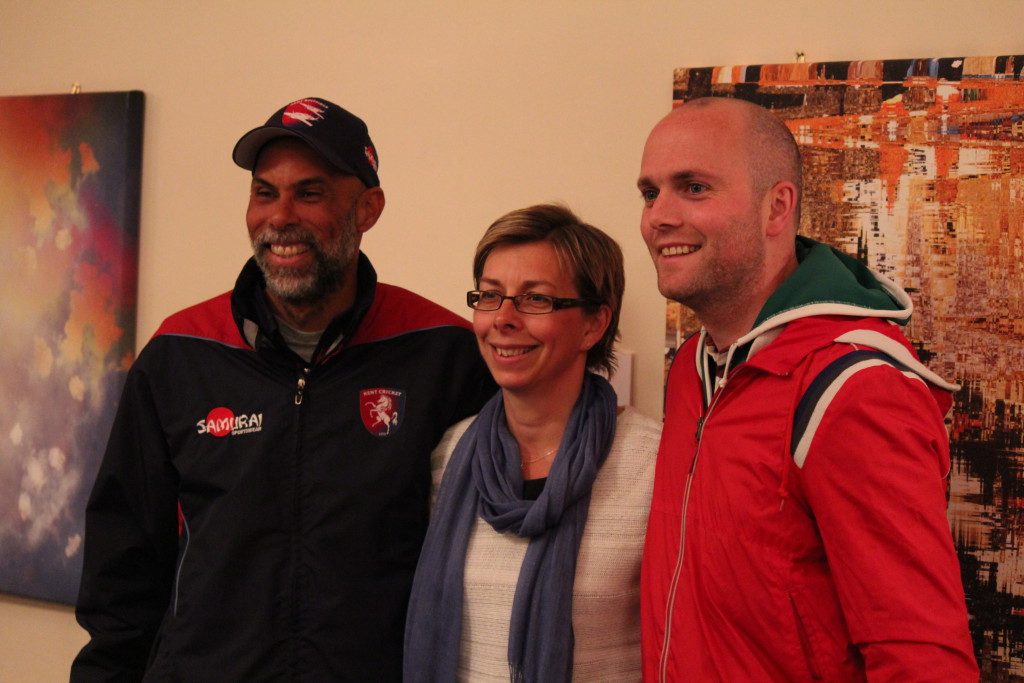 Adams came to visit Trinity through an invitation from his friend, first-year Trinity ordinand Jo Purle.

In response to a series of questions from first-year ordinand Rob Smith, Adams shared details of his growing-up years in Jamaica, how he came to play and succeed in cricket, and the impact Jesus Christ has had on his life.

As a child, Adams attended a large school of 1,200 students, which afforded him the opportunity to play in front of big crowds, something he found he enjoyed. Though his high school in Kingston, Jamaica, offered a wider selection of sports, Adams decided at the age of 17 to focus exclusively on succeeding at cricket. ‘If you played football, you had only one option—to get a scholarship and leave. No one ever saw you again. But if I made it in cricket, I could become somebody.’

His gambit succeeded. Based on his performance on the high school team, Adams was selected into the national age group squad, where he played for Jamaica for a few years before the door opened to an international career. ‘I had no regrets,’ he says. ‘I felt I was getting closer and closer to the goal of playing at an international level. It was a great feeling to start living my dream—it felt like a dream come true, to be honest.’

In the 1991-92 season, Adams was called into the West Indies test squad. In his opening twelve matches, he scored 1,132 runs at a batting average of near 87. In 2000, he became West Indies captain. He retired from cricket in 2004; currently he coaches the Kent County team based in Canterbury.

Adams grew up in a Christian family with parents who ‘walked the walk,’ and he made the decision to give his life to Christ as a young teenager. But playing cricket made church attendance difficult. Instead, every Wednesday he would attend International Christian Fellowship (ICF) meetings. While the majority of his teammates weren’t Christians, Adams said, ‘They never had any disrespect for my faith. They have a good look at you to make sure you’re not saying one thing and then doing another. But once they see that consistency is there, they accept you. I am trying, with God’s help, to be consistent with who I say I am and what I do. I pray that what people see in me is consistency.’

Those listening to Adams speak at Trinity had the opportunity to ask him their own questions, which ranged from the state of English and Jamaican cricket today to his view of God and what helps sustain his Christian faith.

As the evening closed, Adams offered this final thought: ‘I want you to leave here thinking about Christ. Not about Jimmy. People say this is my testimony. I want to be very clear that this testimony has to be about Christ—not my testimony but what Christ has done in my life. In everything I am thankful to Christ.’

Attendees said that they appreciated Adams’s humility and honesty. ‘I grew up watching Jimmy Adams playing cricket,’ said Rob Smith. ‘To have him come and speak with us about his career and faith in Christ was a real honour and, for me as a cricket fan, a real encouragement. His humility was in itself very challenging. It was a great evening of hearing how God has and is working in Jimmy’s life professionally and spiritually.’