What is a pioneer?

Why the church needs pioneer ministers, and how Trinity hopes to help prepare them. 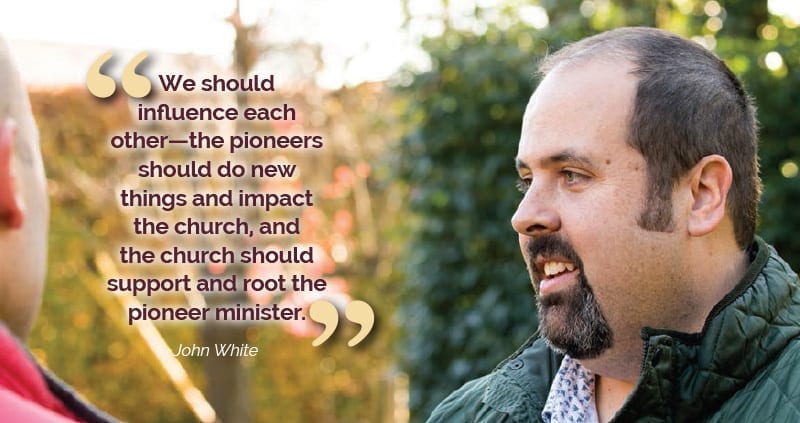 After the birth of her daughter, Sonya Newton decided it was time for a fresh start in her life, for a return to church. After several painful and tumultuous years away, she walked into a church near the estate where she’d been placed as a single parent and sat down in the back, keeping to the edges. But the older women in the church loved and fussed over her baby, and that helped her to continue to come each Sunday. As she connected with other mums around the estate, Sonya found herself leading a growing Alpha group in her home with women who also preferred to keep the edges, and who, despite their interest, were unlikely to step inside a church.

As she met and married her husband, Richard, the couple had three boys in three years, and moved to Gloucester. Once again Sonya found herself connecting with mums on the fringes as she began to lead a mums’ group at a local church. ‘The mums were all looking so tired. They needed looking after! I added a God talk in—a Bible verse and a chat about it.’ When she dropped her oldest son at a nearby children’s centre, she began inviting and walking mums up from the children’s centre to the mums’ group. Soon fifteen mums were regularly attending, and Sonya obtained permission from the PCC to move the mums’ group to a new location at a rugby club just outside the school gates.

‘I had a collar on in my head when I was confirmed at 14,’ Sonya says. ‘But this wasn’t how I was brought up. I was brought up that you grew up and got a good job, and that job would probably be in a factory. “Vicar” was not on the list, so that idea was terrifying.’

Even as Sonya fought against the idea of becoming a vicar, her husband shared the book Personality of a Pioneer with her, and something clicked. ‘This was a helpful term for me,’ Sonya says. ‘I’m a priest, a pioneer. I used to think I’d have to be a vicar according to my preconceived ideas of a vicar, but it’s not something I’ve got to put on. It’s something that will come out of me.’

What is a ‘pioneer’?

The Church of England currently defines ‘pioneers’ as ‘people called by God who are the first to see and respond to the Holy Spirit’s initiatives with those outside the church within a particular context, around which others will gather with them and together establish new Christian community.’ Some pioneers may be church based, working within the parish system to pioneer within an established church base, and others may be ‘fresh start’ pioneers, who work closely connected with a diocese but outside the conventional parish system in areas or networks with no present church connection.

According to Rev Canon Dave Male, the national advisor for pioneer development in the Church of England’s Ministry Division, ‘Our research has shown that in just over a decade, 15 percent of diocesan church communities are now fresh expressions of church, and 60 percent of those attending fresh expressions churches are people outside the present church. Eighty percent of these new communities are taking steps to grow disciples. There is an overwhelming necessity for the Church to grasp at this moment that pioneers and pioneering are vital in leading us to the future of the Church of England’s mission; they enable us to connect with the majority of the population and re-evangelise England.’

To further enhance the training of our pioneer ordinands, Trinity is now offering a Pioneer Focus, for those students who have been approved as ordained pioneer ministers, or who will be serving in a pioneering curacy. 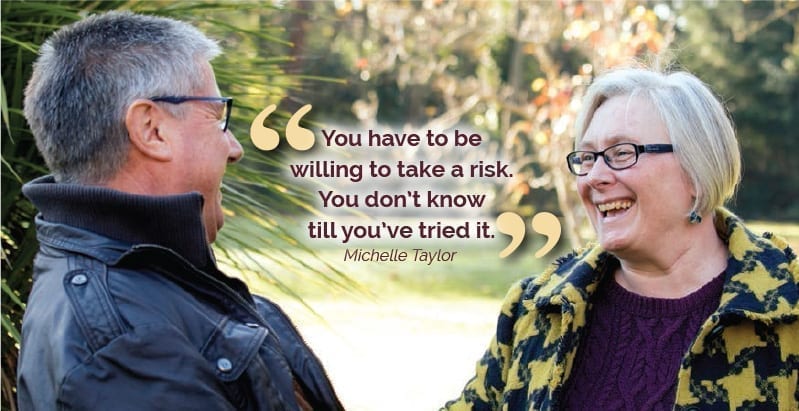 The first pioneer cohort, which is facilitated by mission tutor Rev Dr Howard Worsley, currently includes eight pioneering ordinands—both residential and full-time nonresidential students. It meets twice each half-term, providing opportunities for students to engage with guest practitioners and share experiences and ideas with one another while engaging in pioneer opportunities within their placements. Students are also encouraged through the group’s conversations to reflect on how what they are learning in classes will impact their pioneer ministries, and within classes are offered assessment options with a pioneering focus.

Ordinand Michelle Taylor, who is preparing for a pioneer curacy in Bath and Wells Diocese, says the new cohort is ‘really exciting–what I’m hoping for is to get to hear other people’s stories, to bounce ideas off each other.’

Michelle had worked for three years in a church plant in Portishead, while questioning and re-evaluating what God wanted her to do. After receiving unsought affirmation of her call from an Anglican vicar and several months spent on retreat seeking God, Michelle became Anglican and began the discernment process. When she received a pioneer curacy offer from her diocese, Michelle says, ‘For the first time, it felt like someone was saying “She can do that—let her do that.”’ In her curacy, Michelle will be meeting in a primary school and in small home groups to grow community. ‘I thrive on change,’ she says. ‘You have to be willing to take a risk. You don’t know till you’ve tried it.’

Learning together rather than alone

As the students in the new Pioneer Focus cohort hear one another’s stories and experiences, they realise what a diverse group they are. Some students have already initiated several ministries and others are just beginning. Some move quickly from one project to the next, launching a new ministry and then leaving it in others’ hands, while others explore their ideas for what could be done, within and outside of the walls of a church.

Pioneering ordinand Lucy Howarth had thought at 21 that she would be too young to be considered a pioneer minister. As part of the application process with her diocese, she had to put together a portfolio of what she’d done, which included a student street ministry outside a nightclub in Newcastle and a group for young adults who’d become disengaged with church but who shared an interest in climbing and outdoor activities. ‘You can do Sunday church well, but I think the difference with pioneering is that you meet people where they are and ask, “How can I bring God into this? How can I turn this into church?”’

Because pioneers naturally follow God into new and unlikely situations—one pioneering student recently helped organise a metal mass service that hosted one hundred people in the Bristol city centre—and because pioneers often find that they themselves do not ‘fit’ within established contexts, they may feel alone on their journeys.

‘Pioneers are naturally isolated,’ says pioneering ordinand John White. ‘If we can support each other and keep each other grounded, that’s huge.’ Midway through his first year of ordination training at Trinity, John heard Dave Male speak at Trinity about pioneer ministry, which in turn began John on a process of applying to his diocese to become a pioneer minister. ‘I want to be a bridge between the church and those outside the church. We should influence each other—the pioneer should do new things and impact the church, and the church should support and root the pioneer minister.’

While the new pioneer cohort discusses the challenges unique to pioneer ministries, pioneering students also need a strong understanding of the Bible, theology, and the church. As they often work outside normal support systems and structures, it is perhaps even more critical that they are well prepared.

‘Coming to faith later, as an adult, I had not developed good biblical foundations, and also being quite transient in my adult life—possibly another pioneer trait—I had not ever really settled into a specific church denomination,’ explains pioneering ordinand Tracey Hallett.

Tracey spent six years working with young people in their context, and she says, ‘we accidentally developed a fresh expressions church. It was through my training as a pioneer youth and community worker that God attached me to the Church of England, and I came to Trinity because I wanted to get a good foundation in theology and biblical studies. As such, I’d like to encourage others in the same position in saying that this is the place to be if you want to develop good solid theological and biblical roots.’ Tracey hopes the new pioneering focus will continue to evolve in the ways in which it can offer support and development for pioneering students, and looks forward to the role that this first cohort might be able to play in shaping the group for future students.

As pioneering ordinands connect to share ideas, hear from practitioners, and think together through pioneer-specific applications of what they are learning in the classroom, they can discover not only how to become stronger bridges for those outside the church but also build bridges of support for one another. They can be better equipped to help build God’s kingdom faithfully, to the best of their abilities, with the leap of faith always required in new and unexplored contexts.

Sonya Newton has just begun to connect with another estate where her diocese hopes for her to begin a new ministry. ‘The feeling that you’re called to something you’ve never seen—it takes a lot of struggling to figure it out. For now, I’m wandering around the estate, making friends and looking for those little lights. That’s what pioneers do—they start fires. They look for the sparks, for those little lights around them that say that’s what God’s is doing—go there, go to them.’

This article originally appeared in the Autumn 2017 Trinity News. If you are considering theological education and are wondering if this programme could benefit your preparation for ministry, please contact our admissions office: admissions@trinitycollegebristol.ac.uk or 0117 968 0254.