Twenty-five cameras and a ‘Kingdom’ view

When I gave out twenty-five disposable cameras to the Trinity College community in the autumn of 2014, I had every thought that I’d need to work a pronounced visual transformation in the results. But the messy, humorous, half-in-half-out, blurred faces and limbs in fact turned out to be the corporeal truth of this place. There is certainly a spirituality here that is rarefied and abstract (in music, conversation, or essays), but these pictures reveal an embodied spirituality that is shared in food, in play, in the overlapping of life and space. I like the symbolism too of the underexposed images – approximately half of all the photographs look like a dark fog, where the camera flash was either not used, or was ineffective. ‘Through a glass darkly’ is quite literal here at Trinity!

As I spent time looking through the images, four themes emerged: the Kingdom is backwards, unseen, hungry, and little.

The Kingdom is Hungry is a collage from the multitude of eating and drinking photographs that were taken – there were more of these than anything else. The Kingdom as a feast is a key image in the Gospels, and the party at Trinity College happens over every meal and every communion and every cup of tea. Even as the circular form suggests togetherness, the spiral moves outward and upside-down to include honoured guests. Needing physical sustenance is a key focus for spiritual life here.

The Kingdom is Unseen shows the negative space of figures cut out from photographs. There are five groups of people whose ‘unseenness’ in the community was incredibly visible to me, who are found out in the Kingdom: (from left to right) The unborn who will come after us (there were eleven pregnancies amongst the community at the time), the quiet administrators, the leaders who have gone before us, those who didn’t want their photographs taken for this project, and the noisy caretakers. Jesus’ Kingdom made a big deal of those on the edges of society, and those who shrink from physical sight are nevertheless seen where they are.

The Kingdom is Little captures four children from Trinity College Day Nursery from above. In their littleness – ‘The Kingdom of heaven belongs to such as these’ – they are central to a Kingdom community. To notice them, we need to physically look down, and the perspective change of a view in plan (rather than a view in profile) is a reminder not of adult aloofness and control but of childish absorption and delight. Littleness can be everything.

The Kingdom is Backwards highlights the physical viewpoint of those photographs where people sit in lectures, in chapel, or in churches on placement. When people listened to Jesus speaking, there must have been a similar view facing the backs of others. As much as Trinity is training leaders to be at the front, it is this view that remains unique to the Kingdom’s focus: to positions of humility with each other and to the Old Testament echoes of the back of God. It’s not the place where you can’t see. It’s the place where you can see.

Each theme in this Kingdom series includes a cut-out style (to bring single colour themes to prominence) and a small visual icon as a point of focus. There is a glass of wine, a crozier, toy fish and an altar cross. These icons are directional in that each piece stresses the physicality of looking – we move beyond the contemplation of symbol into the embodiment of symbol. These are symbols which move, are lifted up, are consumed or carried or played with. ‘Living like the Kingdom is near’ (Trinity’s new logo) has that abundance and holistic embrace of life.

This post appeared originally on Sheona Beaumont’s blog: www.shospace.co.uk, where you can see and read more of her work. 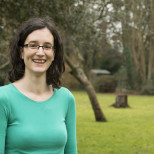 Sheona specialises in digitally-created photographic work and loves to spend her time exploring how photography imparts and contains spiritual meaning. When describing her role at Trinity, she says: “What does the Kingdom of God look like? Jesus told parables when people asked him that question, and there’s a sense in which photographs can tell a story in a similarly oblique but down-to-earth way. I want to pile up the visual evidence of life at Trinity and, from that, begin to see where the word ‘Kingdom’ starts to define this place.” Sheona is a graduate of the University of the Creative Arts in Canterbury, has a Master's degree in Visual Culture from the University of Nottingham, and is now completing PhD research at the University of Gloucester on visual representations of biblical imagery. She is currently using Trinity as a base for her work and research. If you visit us you’ll see her work popping up across the college, from the reception to the laundry room. You can also read more about what she's up to in her blog.