The zookeeper who’s becoming a vicar

For fifteen years, Gary Bowers was a zookeeper. He hand-reared lions and tigers at Paradise Wildlife Park in Hertfordshire. He worked at various zoos across the country–he was the animal manager at the Isle of Wight Zoo–and on conservation projects in Cornwall and Scotland.

But in Yorkshire, whilst working as head cat keeper in a local zoo, Gary found himself in an increasingly dark place. A local vicar began to mentor him. One day an evangelist with the Church Army bus project came to their village to help the local churches in their evangelism efforts. ‘He gave me the gospel straight up,’ says Gary. ‘I thought, this is amazing. I need to do something about this.’ 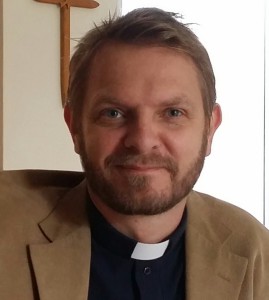 Gary was preparing to leave for a four-month trip to visit LifeForce, a tiger conservation project in India, to study Bengal tigers. The vicar gave Gary a small copy of the gospel of Luke and told him to take it with him on the trip. As Gary sat in his room in India, watching langur monkeys play outside his door, he suddenly felt the need to read the gospel story. ‘I sat down and read the whole thing,’ he says. ‘It moved me to tears.’

Gary spent a few months wrestling with his life situation before he finally gave his life to Christ. He became more involved in the work of the church and, whilst working as an evangelist helping drug addicts through the Derby City Mission, others began to encourage him to consider ordination. ‘I told them I’d never get ordained,’ Gary says, ‘and here I am, ten years later—ordained.’

As an ordinand at Trinity College Bristol, Gary initially questioned the need for academic study. ‘I just wanted to tell people about Jesus. I thought, Is this really necessary? But now I want more of it. It was difficult, stretching, but everything, including how I minister at church, is enhanced by theological education.’

Gary has just began as an assistant curate in Heacham and Snettisham in Norfolk.