From serving a Queen to serving The King

“Well good evening, thank you all for coming to this initial meeting for the… who?… Bob? No, I haven’t seen him… Oh, he’s coming? …Ok we’ll wait a bit then…”
“Welcome all again, and Bob, to the meeting which I’d like to open with…. Oh, could somebody get the door… Ah it’s Joyce… Yes, welcome Joyce, we were just starting… What’s that?….Mavis is on her way… right…”
“Ok, well, once again, welcome all… Ah, we’ll just wait while Dave answers his phone shall we….”

Sound familiar? Yes, this has been my experience more frequently than desired in parish meetings over recent years. I’m pleased to say God has mercifully helped me, through His grace, overcome the ‘I-will-murder-the-next-latecomer’ and ‘expel-the-next-lame-excuse-maker’ stage. But there’s still a small voice in my head that occasionally groans, through gritted teeth, ‘Civilians!’ That is, until the other Voice, the more reasoned, grounded, patient Voice, responds – ‘you are one!’

This realisation still surprises me at times; after almost 15 years serving as an Officer in the Royal Air Force and, previous to that, two years as a private with the Territorial Army Infantry, on top of an upbringing on Royal Navy bases where my Father was a fearsome figure, retiring with 35 years service under his belt as a Warrant Officer. My brother also served 23 years with the Royal Navy and Marine Corps. So having been surrounded by the military pretty much all my life, the last few years have been somewhat of a period of acclimatisation into ‘civvie street’. And parish meetings happen to fulfil a particular type of training in this area!

Of course, the leadership skills I learnt during officer training, promotional command courses and general day-to-day life as a Flight Commander, have certainly been great experience that God will undoubtedly not waste – but they are not as easily transferable as one might initially assume! I could not, for instance, threaten ‘Bob’ with jankers (extra duties) or put ‘Joyce’ on ‘restriction of privileges’ for their tardiness, much less have the church wardens out on parade for some liturgical square bashing. Yes, it’s still important to have structure and an element of discipline, but these must be reinforced in love and grace – which often takes longer than jankers and certainly requires more patience and forbearing!

No, sadly, I feel increasingly distant from the military rule of ‘always be five minutes earlier than the appointed time’ and the tongue-in-cheek army order to ‘HURRY UP and wait’. Nowadays, I must be grateful if folk even make it to a meeting at all! After all, they didn’t sign on the dotted line or make an oath of allegiance in some back room of an Armed Forces Careers Office in Preston as I once did in 1995, thereby accepting the ‘Queens Shilling’. (Actually it was £15 cash for travel expenses, which I promptly spent down the Dog and Duck with the other newly enlisted airmen.)

As a practical placement during my time at Trinity, I spent a week with the Army at the end of last year on a military Chaplaincy course. I wasn’t sure how it would feel returning to Amport House Chaplaincy Center, where I had stayed previously as a serving officer, or how I would feel visiting the bases where I had, in a previous life of sports cars and cocktail parties (she sighs wistfully), been on courses or attended various Mess functions. If I’m honest, I was a little wary that I would hanker after that slightly hedonistic lifestyle I had left behind to follow the Cross. But instead of regret and sadness, I felt a strange nostalgia. A sense that the place and traditions had not changed, but I had. Not only in my circumstances, but in my priorities, my character, in fact my whole purpose in life! And it felt good.

I may no longer carry an SA80 rifle and follow Her Majesty’s Forces rules of engagement on issuing the challenge to ‘stop or I fire’. But now I carry something far more damaging to the ‘enemy’ than a physical weapon. And my new challenge is as much to myself as to others: that is, to follow Christ and His teaching. I am on orders from a greater Commander than one who ever wore gold braid and peaked cap. It’s exhilarating and liberating to grasp that my mission now is to love above all and to be open and obedient to the Holy Spirit; not fettered by rank, Queen’s Regulations, tradition, restrictions or protocol.

Although I still cannot help occasionally consoling myself during parish meetings by mentally reflecting on the blessed assurance that GOD’S TIMING IS PERFECT! 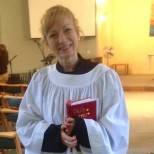 Sarah is currently in her second and final year of ordination training at Trinity. She's looking forward to her next assignment up in Lincoln as she joins the team at St.George’s Church as a curate later this year.