When moving to college means living outside of your comfort zone. 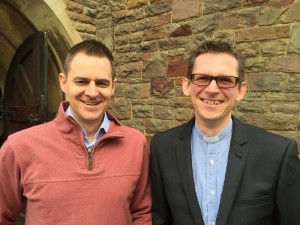 Before Sean Sheffield had even begun his training at Trinity College last autumn, he’d already had a strategic conversation with Director of Pastoral Studies Rev Sue Gent. Since 2014, Sue has carefully worked with all of Trinity’s full-time residential ordinands to connect them with a Bristol-area church, where they will embark on an experience that will last for the duration of their training, alongside a mentoring vicar and a group of fellow Trinity students.

As Sue described various church options, Sean felt God calling him to serve at St Andrew’s Church in Avonmouth, Bristol. Sean, his wife, and their two children were coming to Trinity from a rural area in Canterbury Diocese, but feeling called to live and serve in a more urban area. Their home, rented for the duration of his Trinity studies, is just a three minutes’ walk from the church, and a bus ride away from Trinity.

Rather than either remaining where they are and continuing forward in a familiar context, or moving to Trinity’s campus and becoming solely immersed in books and classes, all of Trinity’s residential ordinands are carefully placed in churches around Bristol, whether in villages, deprived neighbourhoods, suburban areas, or in the city centre. And there they begin very intentional mentoring relationships with vicars. Alongside their class work, they will set goals for their own growth in a church context, experience differing church traditions, gain experience in new areas of ministry, and serve and learn collaboratively with fellow students.

Ordinand Ed Down and his wife, Zoë, came to Bristol from an evangelical church in Oxford Diocese with six hundred people weekly and four services on a Sunday. The couple sensed God calling them ultimately to work in a more deprived area in the north of England. When Ed described his calling to Sue, she suggested he have a chat with Rev Martin Gainsborough about his ministry at St Luke’s in Barton Hill, Bristol, a church of fifty or sixty people. 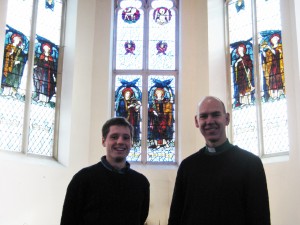 The two connected on the phone, and Ed and Zoë decided to move from Oxford to the Hotwells area of Bristol, a 15-minute cycle ride from St Luke’s, when Ed began his training at Trinity.

Along with four other Trinity students, Ed spends roughly two hours a week serving at St Luke’s—mostly helping with the church’s youth group, contributing to Sunday morning’s music, and preaching and leading services.

‘The kids’ work is quite tough,’ Ed says. ‘I’d done loads of kids’ work before, lots of summer camps with Scripture Union, but this is different. Their behaviour can be particularly difficult. You have to learn how to set boundaries, or how much to set boundaries and how much just to give them a safe place to play.’

Once a month, Ed attends the church’s drop-in, which runs on Sundays and Wednesdays, with fifteen to twenty regulars coming to enjoy the bacon-egg sandwiches and table tennis. ‘I hadn’t done something like this before,’ Ed explains, ‘but once I’d been a couple times, it was fine—I knew people, I could chat with people.’

Ordinand Adam Tams and his wife, Jess, came to Trinity after working at Christ Church Clifton in Bristol for four years. Wanting an experience outside of Bristol, Adam spends his Sunday mornings at St Andrews in Backwell, Somerset, which is led by Rev Margi Campbell.

‘St Andrews is quite liturgal in style,’ explains Adam. ‘It has a strong emphasis on the Eucharist, and the sung worship is led by an organ and robed choir. This was different for me, both in terms of the style of service and in its view of sacrament. St Andrews do this really well, and whilst it may not be the most comfortable place for me to worship, I can and do worship there. It’s very easy to think that the way I prefer to worship is how everyone else should worship, but we are all different, and all need different things. I’m learning as a leader not to make a service according to my own preferences, but to discern the needs of my congregation.’

When Jenny Buckler moved to Bristol to begin her training as an ordinand last autumn, she chose St Stephen’s in Southmead for many reasons, but especially because it had a woman vicar.

‘When I was first called to ministry, I didn’t believe women should lead a church,’ she says. ‘I’d been told that growing up. It’s been a difficult journey coming to terms with that.’

Jenny lives in the Carter building on Trinity’s campus, and drives to St Stephens, where Rev Tanya Lord is the vicar. Jenny had wanted to gain the experience of working alongside and watching a woman in leadership. 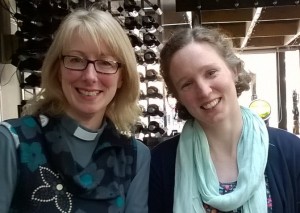 ‘I’d come with little experience of seeing a woman teach or lead churches, so it is encouraging to see Tanya being so effective in ministry. She is passionate about evangelism and growing a healthy church. It is refreshing to see a woman in leadership who doesn’t avoid difficult conversations.’

Jenny initially met with Tanya, as all of Trinity’s ordinands do with their mentoring vicars, to talk about personal learning goals for her time there. ‘My lack of experience is to do with leading and teaching. At the moment I’m working to set up a prayer ministry group and also helping lead Alpha discussions. I find it difficult speaking in front of people, but Tanya is gentle and very enthusiastic about having students there. This church has been very welcoming and gracious.’

For Trinity’s ordinands, the ongoing mentoring from a vicar is one of the most valuable aspects of this part of their training. Ordinand Rachel Robertson moved with her husband and three children from the urban diversity of London to a rural area outside of Bristol, where her primary church experience is at Malmesbury Abbey with vicar Rev Neill Archer. ‘I really like him,’ she says. ‘When I received my feedback forms after preaching a sermon, everyone was positive, with only two which gave suggestions for improvement—one from my husband, who is always insightful, and the other from the vicar, giving praise but also specific points for development. I’m so pleased he didn’t just say “Great job!” but had helpful things to say. He’s really good at gently pushing me to do things I wouldn’t have done otherwise.’

Many Trinity ordinands get to watch as their vicars implement changes in their churches, and they can learn from what they see, and from the vicar’s insights and honesty about the process. Sean’s vicar Rev Andy Murray had just begun as vicar of St Andrew’s, Avonmouth, and St Peter’s in Lawrence Weston last September. ‘I can see what it’s like,’ Sean explains, ‘someone coming in, and significant change has to be effected for growth. I like how Andy respects and protects people. He’s a good guy to be watching—even at ministry planning meetings, everything will be biblically led from the start.’

Adam agrees: ’I’m learning a great deal from being able to watch Margi. She has tremendous insight into the needs of her congregation and the parish as a whole. She’s implemented, in partnership with another church, a new congregation meeting elsewhere in the parish. This has a very different style to the worship at St Andrews, and Margi would probably say it is out of her comfort zone, but she can see the need for it and so is working on meeting that need.’ 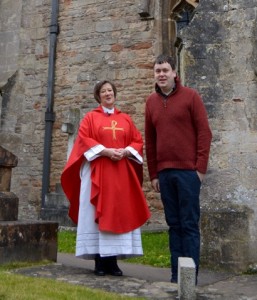 As students spend time in classes, and as they meet weekly for reflection with a tutor and small group of Trinity students, most of whom will be serving in the same church together on Sundays—connections happen.

‘As our group meets monthly for supervision with our vicar, and meets Wednesdays in pastoral group with [theology tutor Rev Dr Jon Coutts], it strengthens links,’ says Jenny. ‘We all negotiate together what we want to talk about. Currently we are talking about the process of theological reflection for making changes at church. What’s the thinking process behind making a change? Everyone contributes to the discussion.’

‘I’m thinking much better theologically,’ explains Ed. ‘When preaching—and at my church it can only be 10-minute, short sermons—without the learning I’ve had, I would find it hard to distill what I’m trying to teach. Also, the worship lectures [with Rev Dr Paul Roberts] have helped me think about what we’re there for, why we do things the way we do. I’m doing things in a more structured way—it’s definitely affected the way I put a service together.’

As part of their training, the ordinands also gain additional experiences through a 20-hour community placement, and one 4-week summer placement. The students’ ongoing church experiences can help them discern areas to explore in the shorter placement experiences. 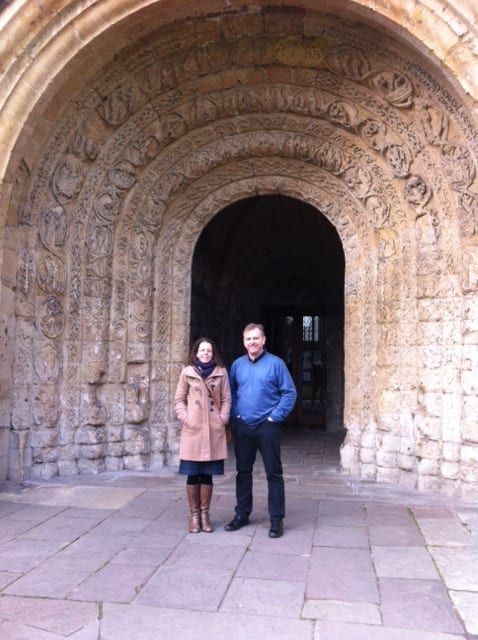 After working at his church’s drop-ins, Ed decided to spend his community placement at Bristol NW Food Bank. Rachel’s work at Malmesbury led to a community placement with a school chaplain: ‘I am really keen to do that. It’s a chance to think: Is chaplaincy something I’m interested in, long-term? For the next couple of Mondays, I get to shadow someone who’s really good at her job. I was invited to preach to 11- to 18-year-old girls—it was intimidating, but the more I thought about it I became really excited.’

While Rachel continues to pray to discern where God might lead her once her training is completed, she says, ‘between the college and the people at the church, I really don’t feel on my own in any of this.’

‘What I like about this,’ says Ed, ‘is that it formalises the church training experience. It provides a mechanism for reflection about what you’re doing. You get legitimacy immediately to stand up and lead and preach in a church. I gave my first sermon within a month. If I’d just joined a church it would take longer. Because of the formal relationship between Trinity and the church, I can get straight in—that’s really positive. And I love studying and reading. That’s why residential is best. I knew I’d get to spend time properly engaging with theology and the Bible.’