Race and the Church

During a diversity plenary week, Trinity students thought more deeply about issues related to disability, race, and the church. Three Trinity students shared their own personal reflections regarding race and church with our community.

Mary Hotchkiss is an ordinand completing a Diploma in Theology, Ministry and Mission.

No person of colour is the same, nor do they experience things in the same way. I was born in Zambia, grew up in Botswana, and lived in South Africa in my teens and early 20s. Growing up as an expat in Botswana and as a person of colour in South Africa (I was 14 when apartheid ended), my race was an obvious part of who I was. Other people made distinctions and assumptions about what I was, so for me, at that time, it didn’t help to keep thinking about it. I had other things I wanted to do in life and I was more than just my colour. In fact, until this moment I have never had to talk about race and theology, and until I started training in the CofE, I had never been made so aware of my ‘otherness’ and my ethnicity.

I have heard a number of times now, ‘Of course you will get through or be chosen, you’re under 40, a woman and a minority.’ Which I feel so uncomfortable hearing, and has left me constantly wondering, is that what others think I am doing here? Is that why I am here? Is this why the CofE wants me? Nowhere in that statement is there anything about my character, my values, or my gifts. It’s a strange place in which to be.

Many people make assumptions before knowing me. For instance, that I must be Hindu, or Muslim, or have an accent that will be difficult to understand. So ‘what am I?’ (a question I have actually been asked!) My family have been Christian for many generations—my grandmother would proudly say our ancestors were converted by Thomas himself when he came to India. I am Indian, consider Africa to be home, though in fact I am now British (I’ve taken the test!).

But here I am, almost 40, having been brown skinned all my life, and now faced with having to think about what it means to be different and how to embrace it. God is apparently calling me to be different, because I am. I haven’t done this to be a role model, but I am one of the few and it will matter what I do and say today for those who are different, who come in the future.

My children are mixed race and I question what that label will mean for them in the world and in the church. How will they be received when people find out they aren’t as white as they first appear? I have often looked at them and felt that it’s so obvious we are physically different, and I wonder, when they look at themselves, do they see me in them at all? Do others see me in them? I wonder then if God looks at me and wonders if I realise I come from him. Do I recognise him in me? Do I see my Father reflected in my image? We are all created in the image of God—I wonder do you, my peers, my Christian brothers and sisters, see our Father in me? 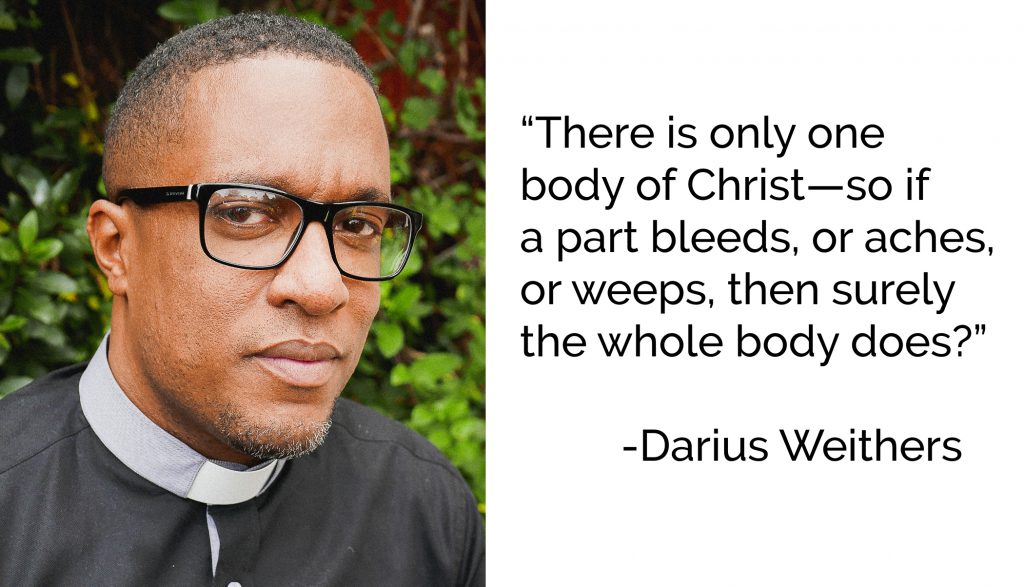 Darius Weithers has recently begun the first year of his curacy at St Matthew’s Church in South Croydon.

It is tragic to me that in South London I would go to the barbershop once and hear a hundred questions about race, and go to church on a hundred Sundays and, just as if these questions did not exist, never hear an attempt at addressing even one of them.

My life experience is such that I see few more pressing live issues in the church than that of ‘race’. I don’t particularly enjoy talking about it, but by virtue of being born black in a country that has centred itself—historically speaking—on the ideology of white supremacy, my hand has been somewhat forced. I am a child of the so-called ‘Windrush’ generation, and my entire life I have faced this overwhelming sense that in England: ‘If you are black, then that is your problem.’ When the kid in the school lunch queue calls you a ‘coon’ and those around shrug their shoulders—‘It’s your problem.’ When your girlfriend’s dad, while you’re eating, accuses your ancestors of being cannibals and she says nothing—‘It’s your problem.’ When you go to church the morning after another black boy has been slain just metres from your worship space, and the songs are happy and the sermon from another world—‘It’s your problem.’

In 1 Corinthians 11, Paul tackles specific concrete sociopolitical divisions in the Corinthian church. The issue is that the banquet, instead of proclaiming the death of the Lord Jesus Christ, was proclaiming the sociopolitical status quo of an oppressive Roman Corinth. The ugly situation that Paul addressed is summarised in the contrast he draws between the poor who, in the context of a supposed Lord’s Supper, are going hungry, while the rich meanwhile are getting ‘off their face’. In other words, the church in Corinth was demonstrating by its table fellowship that if you are poor, then it is your problem.

For the church in Corinth, and for us today, the schismata, the disconnect, is not dissimilar. If the Corinthian church was divided along the social lines of a stratified Corinth, then the Church of England is divided along the social lines of a racialised England. Paul’s challenge to those who will partake in The Lord’s Supper together? Discern the body. Unify not around social sameness, but around the broken body and shed blood of Christ.

We must ask ourselves: how can we train church leaders to be more aware and engaged with issues of colonial and racial legacy in the church and its theology? What would it look like if we, the Church of England, were truly to repent of our colonial legacy? Can we afford to continue—literally—painting pictures of Jesus as a white man even though we know he was not? What needs to be done in order to repair the damage to both the church’s credibility and her theology that was caused during the relatively recent periods of slavery and colonialism? How do we strike a balance between respecting and honouring the tradition of the saints, while prophetically cleansing the church of its colonial and imperial DNA? How could our traditions increasingly demonstrate that we are aiming to be the Church of an England that is as racially and culturally diverse as the Roman cities of the first century?

Alison Walker is in the first year of her curacy in Hereford Diocese; she continues to complete her PhD programme at Trinity.

Almost three years ago now [Trinity tutor] Jon Coutts recommended a book that I subsequently devoured over the summer holidays—the first theology book that I was to read cover to cover, scribbling comments in the margins and underlining something on almost every page.

This book was The Christian Imagination: Theology and the Origins of Race by Willie James Jennings. One of the many reasons I loved this book so much was that it stressed the importance of geography and place for human existence. I was certain that the rural community I had grown up in had formed me in some way. Jennings’ book speaks into these thoughts and confirms my belief in the importance of geography and locality for who we are as individuals and communities, but he also did much more than this.

He revealed to me the invisible racial politic that is at work in Western society, which means we live in a world in which, as Carlton Turner phrased it during our diversity week sessions, ‘the Black body, the darker skinned person, and their culture and heritage (mainly non-western/European), are seen as less valuable, less beautiful, or simply expendable.’

Jennings confronted me with my ‘whiteness’—my culpability in these hierarchical structures that prejudice those who are not white. He showed me the benefits I have directly received as a result of my being a white European. I have experienced privilege in ways I could not see. Jennings also helped me see the church’s complicity in this—how during the colonial period the European church demanded that to be a Christian meant conformity to white, western ways of practising the faith. No joining or inclusion, but only assimilation and the death of ways of life and cultural practices.

What do I do now? What do I do about this as someone who is about to be ordained a deacon in the Church of England, who will be serving in a predominantly white, British, middle class community?

Jennings writes in one of his many journal articles that ‘we need a church made up of people who refuse to live out racial politics… who refuse the power and privileges of whiteness, who reject the stereotypes of blackness… who will not be known even by family, tribe, friends or nation after the flesh, but who would know themselves only through the power of resurrection and the call of the cross of Christ.’ This statement fills me with hope, yet also leaves me with more questions as to what needs to happen next.

While the plenary week at Trinity created the space for students to begin to consider and dialogue about these issues—and ideally to dialogue with and listen to people with different perspectives from themselves—it’s only a first step. Below is the diversity week booklist, with a few additional books recommended by our students.

Brian Bantum, The Death of Race

Richard Twiss, Rescuing the Gospel from the Cowboys

James Cone, The Cross and the Lynching Tree