As part of their training, all of Trinity’s ordinands serve in a 20-hour community placement, in addition to their church placements. Ordinand John White served his community placement last year with the organisation Bridges for Communities, which offers training for those who want to become bridge-builders in their local communities. John reflects below on the ‘Peace Feast’ he attended at the start of his placement, and its impact on him. 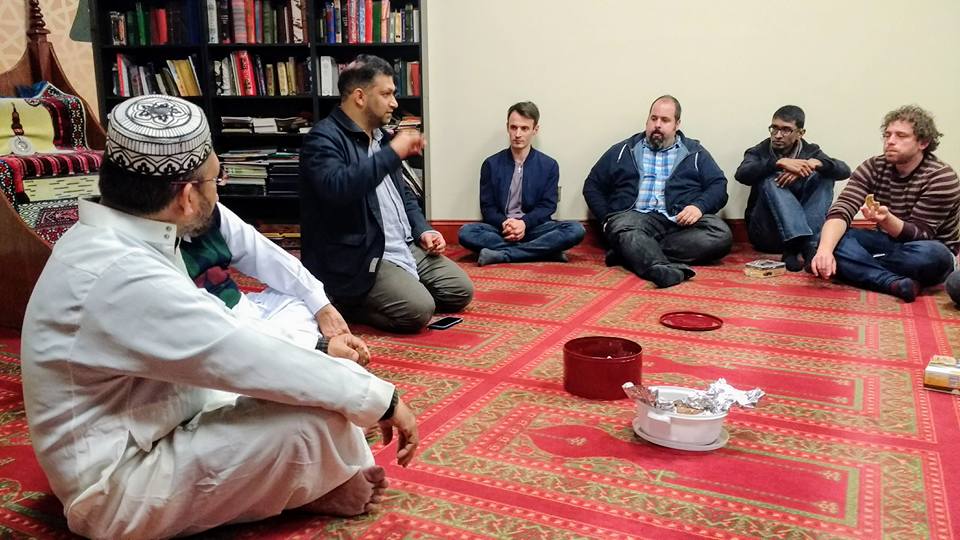 After participating in the Peace Feast, ordinand John White and several other Trinity students baked cookies to share at a local mosque.

Last January, my community placement ‘Bridges for Communities’ filled a Lebanese restaurant on Gloucester Road with Muslims, Jews, and Christians for a ‘Peace Feast’—no small feat in our current world of Brexit and Trump. Prior to this night, it has been many years since I have spoken about faith with Muslims, and I do not think I have ever spoken about faith with a Jewish person.

At its core, the Peace Feast was about finding mutual ground; its theme was ‘Love thy neighbour’, and during the evening, people of different faiths were mixed into groups to share a meal together. After each course, a faith leader stood up and shared his or her perspectives on the theme from that religion’s point of view. On this night, there was a Muslim imam from a mosque on Gloucester Road, a Vineyard pastor, and a female rabbi from Bristol and South Wales.

I was seated next to a Muslim woman of about 45 years of age and a rabbi. It was the first time that I had spoken to a rabbi, and I asked her about her calling and about being a woman in ministry. I was surprised at how close her language of calling was to my experience of the Anglican tradition. She spoke of knowing it her entire life and feeling that she could not run from it. She was also open about the struggles of being a woman in ministry.

We spoke about how people outside the church react to a religious calling. I shared about feelings of being misunderstood by my family, who are not Christians. A Muslim woman shared about her teenage daughter losing her faith and becoming agnostic, about the difficulties of her daughter turning her back on a belief that was core in the mother’s life. The rabbi gave advice to the two of us on why people lose faith and want to argue about faith matters once they have left religious beliefs.

I was taken aback by the connection we had on spiritual matters. Speaking of regrets and hopes, after a time we felt closer to each other. I enjoyed the evening so much that I felt conflicted afterwards. If we had so much in common, why do people of different faiths not work together more often? And, how can I encourage interfaith dialogue with mutual respect while still holding my differing beliefs as sacred?

I began to think about the story of the Good Samaritan. In this parable in Luke 10, Jesus is answering the question of ‘Who is my neighbour?’ In other words, whom are we required to love? Jesus tells the story with an unexpected ending, as the Samaritan is the one who helps his enemy. In his book The Gospel According to Luke, Leon Morris describes Jesus as not answering the question ‘Who is my neighbour?’ but instead answering ‘To whom am I neighbour?’ The challenge then is to turn the question of neighbour not onto the actions of another but back to the actions of oneself—to walk a path toward seeing all people as those to be treated with equal love regardless of religious beliefs.

In the end, it is my responsibility to love my neighbours even if I disagree with them. This is a challenge for my perspective on other faiths. I have previously felt it was my job firstly to convert my neighbour and secondly to love them; in fact the opposite is true—I must first love them and then allow the Holy Spirit to do the job of enlightening beliefs. Claire Disbrey writes about how this love can be communicated with those of other faiths.

It is the Spirit of God who opens people’s minds and draws them into a saving relationship with him. Our task, whether through preaching or service, has always been to create a situation, an atmosphere, in which God’s Spirit can work, widening understanding and deepening faith.1

If we as Christians are seeking to know Jesus and his revelation, we must trust him enough to encounter others without fear or prejudice, to encounter them as ones to love, and allow space for differences to deepen our own faith.

John is a pioneer and ordinand from Guildford Diocese, currently studying for a diploma. His wife, Pippa, began her ordination training at Trinity in September 2017.