Finding Jesus in a hot meal 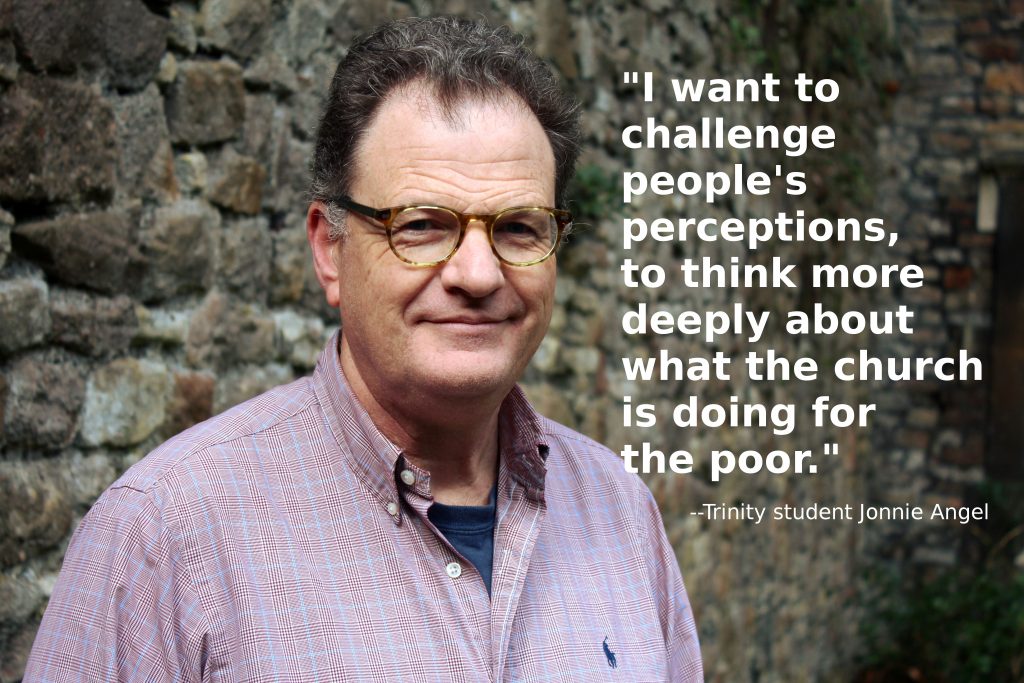 At the beginning of 2011, Jonnie Angel was an operations director for a property management solutions corporation with an estimated worth of over a billion pounds, overseeing the delivery of contracts. By the end of 2011, at the age of 46, he had been made redundant. In what became a year of loss for him, he also lost his home.

The next several months became a time of reflection for Jonnie. ‘God spoke to me about being real,’ he says. Though Jonnie had been a Christian since his childhood (his father is former Trinity New Testament tutor Rev Gervais Angel), he explains, ‘I was very much doing stuff for God out of my own agenda. There was a lot of denial of reality in my life.’ He realised he’d been caught in a mindset focused on achievement and success, about looking a certain way in front of others. Now he prayed, ‘Lord, not my will, but your will’ and determined to follow in whatever God had next for him.

It was whilst attending an evening church service that Jonnie first encountered the Wild Goose Café, as he listened to its general manager describe its work in Bristol. Through Crisis Centre Ministries, the café fed those without homes, rough sleepers, people caught in addiction, and others who’d found themselves in places of need, sometimes simply the need to find friendly faces.

Jonnie decided to volunteer one or two nights a week at the Wild Goose during his time off working, and soon was duty manager one night a week. As he invested time at the Goose, Jonnie found himself caught between two job possibilities: a part-time estate management job and an opening at the Wild Goose for an assistant manager. Again, he prayed, ‘Lord, what do you want me to do? Whichever comes up first I’ll take.’ In July 2012 he became the Wild Goose’s assistant manager, and in 2014 he was appointed project leader for the Goose.

As Jonnie’s new role put him regularly in the position of needing to speak in local churches and schools about Crisis Centre Ministries and issues around homelessness, he began to seek out a deeper level of theological learning as an independent student at Trinity. After completing the Certificate last year, he’s now in his first year of the Diploma. ‘I want to challenge people’s perceptions,’ he explains. ‘I’m being equipped through study to do that. All of my classes have been relevant. I want to think more deeply about what the church is doing for the poor, and understanding the metanarratives in scripture has enabled me to understand this better.’

At the Wild Goose, Jonnie has recognised practical ways in which his previous job, which included public sector work, prepared him for this new endeavour. He also began to see a benefit to his troubles in 2011. ‘Ten years ago, I was one of the people who would have walked down the street, feeling comfortable to judge other people’s situations,’ he says. ‘Though I’ve not had addiction, I understand now that sense of loss, of being stripped of everything, the pressures around housing. The things I’ve been through give me a real empathy to understand other people’s stories.’ 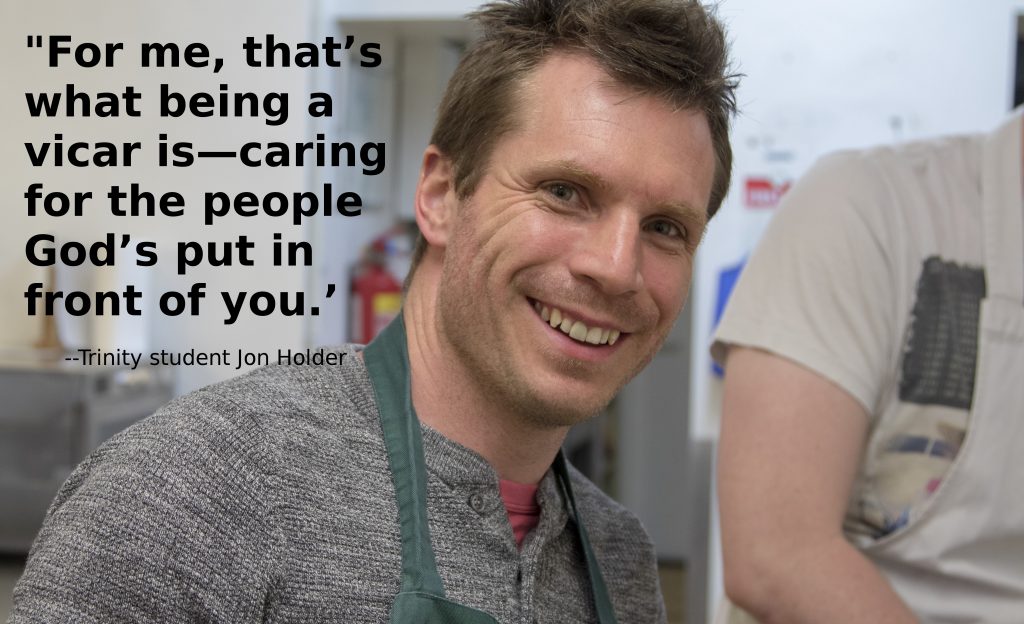 According to Crisis Centre Ministries, ‘The number of people sleeping rough has doubled since 2010, with Bristol now having higher rates of homelessness than anywhere outside London’. Simultaneously, the homeless services offered through the government have been cut by 45 percent between 2010 and 2015.

The Wild Goose Café, which purchased its current location on Stapleton Road in Bristol after millionaire Dawn Gibbins posed as a volunteer at the Goose for the TV series The Secret Millionaire and then donated £125,000 to grow the ministry, now provides 500-600 plates of food each day. ‘We enable the church to be able to serve the most marginalised and vulnerable in Bristol,’ Jonnie says, as he mentions the 400-450 volunteers from various Bristol churches who staff the café every week. In addition to providing breakfast and lunch four days a week and an evening meal six nights a week, the Goose hosts advisory sessions about housing, finance, employment, health, and citizens’ rights. They provide weekly medical clinics for street drinkers, help people with their appointments and forms, and offer fresh clothes, toiletries, showers, laundry, sleeping bags, and more. In 2017, the Love Britain + Ireland Awards recognised the outstanding work of the Wild Goose, as a charity that puts ‘Christian faith and love into action within your local community’.

‘Through providing food, we’re also building relationships with people,’ says Jonnie, ‘We accept people unconditionally—they can walk in and leave without talking, or they can come in and ask for support. Some call us a community café—it has that feel. We have a self-managed chess club, and someone sometimes brings a guitar in to play and teach others as well.’

Future vicars at the Goose

Jonnie has increased the number of students completing placements at the Wild Goose to sixteen, and while some are medical students from Bristol University, the majority are Trinity students. All Trinity ordinands must choose a community placement to complete in their first year, in addition to a church placement that lasts for the duration of their programme. Community placements help diversify students’ experiences of mission and ministry, while also helping students to engage with people who are different from themselves, to think theologically about what ministry looks like in a ‘secular’ context, and to think about what role the church might play in partnership with other organisations. Several current Trinity students have completed placements at the Wild Goose, many of them continuing to volunteer there, even after the end of their placements.

‘My spirituality is very much worked out in practical service,’ says ordinand Jon Holder, who came to Trinity two years ago after helping lead a youth outreach programme at an estate in Oxford. Just two weeks into his programme at Trinity, he began volunteering weekly at the Goose not only for his community placement but throughout his programme. On the nights he serves as duty manager, he manages a team of eight to ten people, oversees the food preparations, prays with the team, serves hot food, tea and coffee, cakes, and fruit, and chats with that evening’s guests. ‘A few people I know quite well by now, and I’ve been able to have long conversations over several weeks with people. One guy I bought a Bible for, and he is reading it now.’

Many of the Trinity students who’ve volunteered at the Wild Goose leave the experience affected not only by the opportunity to serve but by the experience of seeing the local impact that can happen when churches work together. ‘It’s been powerful to see people from lots of different churches coming together to volunteer,’ says ordinand Dave Edmondson, who completed his community placement at the Goose and who continues to volunteer fortnightly. ‘If one church opened its doors one night, and another church opened its doors another night, it would not have the same level of impact. It’s great to see lots of different denominations come together to serve like Jesus did. When churches come together they can do incredible things.’ 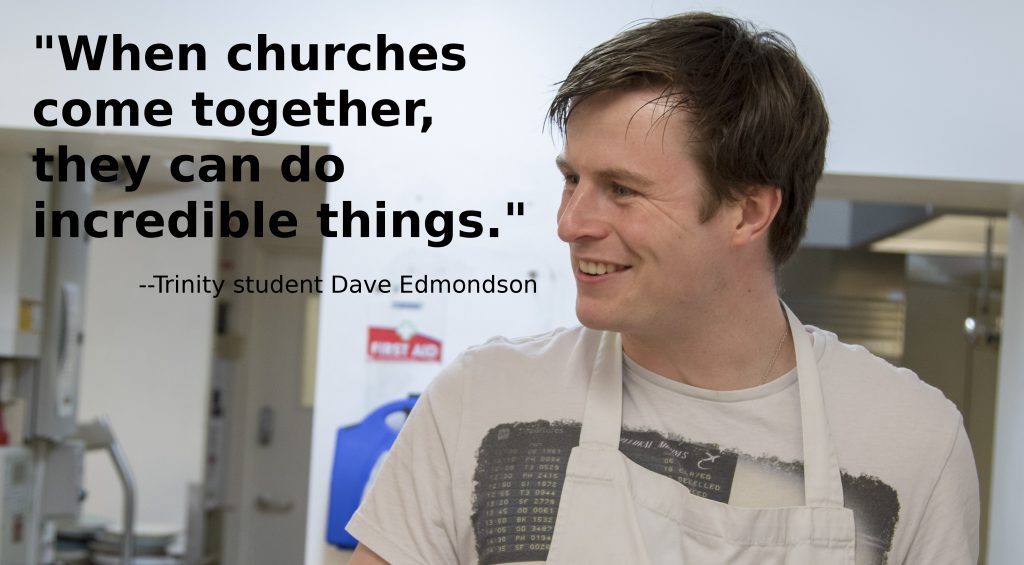 And as Jonnie Angel found God disrupting his preconceptions with a new empathy and the ability to see others with new eyes, similarly the students can find their interactions at the Wild Goose disrupting some of their previous ways of thinking, changing them, and raising questions about how they might seek to conduct their future ministries.

‘I’ve realised that people are just one relationship breakdown, one bad decision, one spiral from being on the streets,’ Dave says. ‘It highlights the importance of being there, of listening. And, in thinking about doing pastoral care, how do you do that in this situation? With people going through horrendous things, whether that day or long ago—how do you do that? And, if the one or two hundred guests of the Wild Goose walked through the doors of my church, what would the reaction be? I haven’t got an answer for that one yet.’

Ordinand Elliot Swattridge has found his time spent volunteering at the Wild Goose personally formative, as he’s needed to face his own nervousness in advance of going each time. ‘I’d feel a good deal of anxiety before going to volunteer, thinking about all the people there, and imagining standing around not knowing who to talk to first and what to do next. Yet, it is in this struggle that God has worked most in me. And then, as a result, I’ve stumbled into so many conversations with guests who are in horrendous life circumstances, yet just say how they feel God somehow working in their lives in a way they can barely put into words. God is clearly at work in these people, and it is a privilege to be used as even a little piece in the puzzle.’

‘Being in a predominantly white-middle class church placement, it has been important to stay in touch with the realities and experiences of some of the most marginalised people in society,’ says ordinand Sam Rylands. ‘When we talk about “serving” in the church, it’s used to mean joining the tea and coffee rota, or the kids’ team—and these are great things, but that’s serving the church. The church is called to serve the world, and the Wild Goose is a really good example of the way the church does that.’

‘When you are dealing with a homeless man throwing up everywhere, and you’re cleaning it up and covered in it, you can reflect on Jesus, and on what he would have done,’ Jon Holder says. ‘For me, that’s what being a vicar is—caring for the people God’s put in front of you.’

Article by Melissa Stratis; this article appeared originally in the spring 2018 Trinity News.