My dad committed suicide when I was eleven years old. In later life, I had a miscarriage and lost a baby I already loved dearly. Both times, I was plunged into the question that echoes in every human heart: how do we reconcile immense pain with the reality of an all-loving God?

I am under no illusions and remain fully aware that the suffering I have experienced is nothing on the scale of the extent of human suffering. However, it led me to explore what is often perceived as a tension: How can we understand the love of God in the face of human suffering?

We can be almost certain that members of our congregation will at some point ask this question, whether out loud or in the depths of their hearts. As leaders, in whatever capacity, we have to be prepared to engage in these conversations. Theodicy has sought to explore this very question and in some cases with particular insight has managed delve into the issues. However, it seems to me that very often theodicy seeks to defend God, as though if we could provide a legal defence, we could determine that the causal relationship is not between God and suffering, but rather between humanity and suffering.

However, I would humbly suggest that when all we seek to do is uncover the logical argument we miss the point. Is the cry of the human heart in times of pain ‘How can we understand the love of God in the face of human suffering?’ or is it ‘Does God actually care?’

Even if in our arrogance (perhaps I am talking to myself here) we assume that we can formulate a defence for God and successfully prove that he does not hold the responsibility for suffering, I wonder if in doing so we have truly responded to the cry of the human heart: Does he care?

The book of Ezekiel offers rich insight when considering this. At the time when God gives Ezekiel a vision of a valley of dry bones (chapter 37), Israel had been destroyed, seemingly beyond the point of restoration. It is hard to imagine the sense of hopelessness and loss that the people must have felt. We get insight into this in verse 11 when the people say: ‘Our bones are dried; our hope is lost; we feel ourselves cut off.’

The vision that Ezekiel received from God was of an army defeated. The bodies of fallen soldiers would have been abandoned on the battlefield. Robbers would have stolen any armour, clothes, jewellery, and anything else of any value, and then the birds would have come and eaten the flesh. The soldiers were quite literally stripped of everything. The people were living through difficult times, and the image of the army stripped bare would have resonated with their experience.

Both for us and for the people we serve sometimes it will feel like that, like we have been defeated and stripped of all we have. In our lives and encounters with people in deep pain we should never deny the immensity of suffering, but we must also be aware that no matter how desperate times are and how overwhelming the sense of pain may be, God offers his grace and hope. Ezekiel’s vision didn’t end with those stripped, bleached, lifeless bones—it ended with God coming and breathing life.

This is a vision which isn’t referring literally to the resurrection of dead people, rather to the promise of God for a seemingly defeated nation. Sometimes what is lost can never be given back. We must bear that in mind in every interaction with those who are suffering. However, we must also remain conscious that this passage speaks of a God steps in and, even in these times, breathes life and hope.

The breath of life

In 2010, I found out that I had a tumour attached to my carotid artery and that surgery to remove it was likely to result in brain damage, paralysis, loss of speech, excessive blood loss, or even death. With a husband and an eighteen-month-old daughter, I cannot explain the pain of considering the very real chance that I might not be there for them. During that period of illness the pain didn’t go away—it was real and deep. However, through his incredible grace God granted me peace. It wasn’t an act of my cognition, nor an emotional feeling—rather the immense grace of God in which he reveals himself in a way that is outside of human understanding or articulation. God was breathing life. It wasn’t a human capability or a special demonstration of faith, it was God breathing life in a time when it seemed that all was lost.

The message of Ezekiel is to hope in God, not after we have passed through times of suffering, but rather while we are in the midst of them. The challenge when we encounter those times of suffering is to continue to hope and, in prayerful expectation, seek to know the reality that God’s power, holiness, and love are not irreconcilable with suffering. 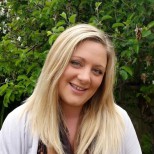 Kim Quak-Winslow is a current student in Trinity's Graduate Diploma programme. She came to Trinity last autumn from Manchester with her husband and two children.