Church in a Crypt

When Jon Swales (MLitt, ADMT 2007-2011) began his curacy in 2011 at St George’s Church in Leeds, he prayed a prayer that would change the course of his life and ministry.

‘Lord, would you bring along my path people who have been broken by life, and help me to love them with the love of Jesus?’

Almost immediately after praying that prayer, he began to cross paths with men and women with horrific life stories. A woman who had been chained to a radiator and repeatedly raped. A man with dwarfism who had been wrapped up and thrown to dogs for sport.

Jon soon added to his prayer: ‘When I love people with the love of Jesus, would you back me up with your power?’ He went into inner city parks, rough pubs, and drinking dens, wearing his collar and telling heroin addicts, homeless people, those living forgotten on the margins of society about the love of Jesus. He showed them that love in practical ways, and he saw Christ changing people. ‘This wasn’t in my job description,’ he laughs. ‘But it became part of my job description—seeing people come to Christ. I’m hardly ever in my office. My office looks like a storeroom—full of sleeping bags and food.’

Jon had come to his curacy at St George’s seemingly by accident—in the flurry of completing his programme he’d missed the deadline to sign up for a curacy. But there was a church still needing a curate, up north in Leeds—the same city in which Jon had been a secondary school teacher in the years before he’d come to Trinity.

St George’s is a city centre church of six hundred students and professionals with a long history of ministry to those living at the margins of life in Leeds. In the 1930s the church cleared out its crypt and renovated the space to provide food for those without work during the Depression. As local needs changed, the ministry shifted and became a separate charity—St George’s Crypt. The Crypt provided support, rehabilitation, and shelter during and after the Second World War. Today it focuses on those combating addiction and poor mental health, providing emergency accommodations and help in accessing professional care.

Jon, brimming with the desire to reach out to those on the margins, had found himself in a church with one of the larger homeless ministries in England.

However, Jon explains, ‘It’s fairly easy in one sense to gather people on the chaotic margins and share the gospel. The real issue is offering long-term, Jesus-shaped pastoral care and discipling those who come to faith and get baptised.’

It’s also not the easiest thing for someone who is homeless or struggling with addiction or mental health issues to step foot into a large middle-class church on a Sunday morning. Jon still remembers once when he’d brought a homeless man to church: ‘He stuck out like a sore thumb—and I wondered how we could build communities which truly welcome and communicate the gospel effectively in this cross-cultural situation.’

Jon, Rev Roger Quick (chaplain of the Crypt), and intern Hannah Robb began to pray for God to provide a gathering space to meet. It became clear that the Crypt, already a familiar place for many in the group, might offer the best location.

Now, since it began in January 2014, around seventy people attend ‘Lighthouse’ in the Crypt every Sunday, sharing a service together alongside a hot community meal. As they sit in groups of three or four around small square tables under the Crypt’s arched red brick ceiling, Jon speaks: ‘We all know that there are many dark storms in life, but at Lighthouse we believe that there is a light in the world—Jesus. This Jesus can provide hope, joy, and peace when we feel like hope is lost.’ The group sings songs that remind them that Jesus is a friend in all situations; they tell one another what they are thankful for, often sharing a simple, ‘I’m thankful that I am alive.’ Jon and others teach from the Bible, often using The Gospels and Psalms of Lament to show the love of Jesus in a world of pain: ‘You have worth because Jesus says that your life has worth.’ In the last year, twenty men and women from the margins have been baptised, and many gather mid-week for Bible study and the Eucharist.

One member, Tony, had once headed up National Front demonstrations in Bradford and Leeds, but as he became more and more overwhelmed by the loss and pain in his life he walked into a church, praying ‘God, help me.’ He picked up a Bible, and, he explains, ‘had a light bulb moment. I’ve been given hope, joy, and peace, and after joining a couple of Alpha courses I’ve gone on learning from there.’ Jon says, ‘Lighthouse was supporting him, discipling him, praying for him. Once, when we stretched out our hands toward him and prayed for him, I looked at those fifty people with their hands stretched toward him in prayer and thought—the last time people did this with him they were doing a “Heil Hitler.”1

But in the midst of sharing some of the dramatic ways in which he has seen God at work in people’s lives, Jon also confesses, ‘It’s a hard slog as well. We have had two suicides in recent months from within our community and every week we seek to respond in love to those feeling abused, betrayed, and recovering from trauma.’

It can be tough on Jon, who is married with four children. ‘It’s different from parish ministry. We can’t live near the ministry. I can’t have my kids there. They have to have a bit of distance from it, for safety reasons.’ However, he argues against what is often a ‘very reasonable’ view of love in the church today. ‘You love but you don’t love until it hurts. You give, but not more than you can handle financially. You love, but you maintain certain safe boundaries. But in the Good Samaritan we see a radical love that goes the extra mile.’

Jon says that he is thankful that, before entering into the stress of ministry, ‘I had serious time to study the Bible in depth at Trinity—this provides the theological fuel for what I do. Being involved in the College Green context ministry, serving those gathering outside the Cathedral in Bristol helped to develop my giftings. I formed habits of prayer at Trinity, of being ecumenical, of drawing from other traditions that allowed me to have liturgical confidence at Lighthouse. And I made friends for life whom I still see, and who support what I do.’ 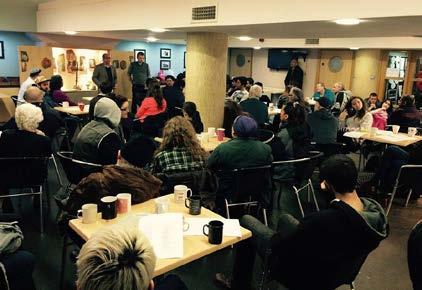 This year Jon was due to complete his curacy and leave St George’s, but instead the diocese, Crypt, and Church have provided funds for him to continue this work: in July 2015, he became licensed as Mission Priest to Lighthouse (Diocese of West Yorkshire and the Dales). With help from an enthusiastic and dedicated team, including friends from Leeds City Mission and local churches, and intern Millie Holmes (who will continue on as Lighthouse Pioneer Pastor in Training), Jon is working to plant more Lighthouses. The next one, in St Augustine’s Church in Leeds, will be a gardening project combined with a Bible study. He hopes soon to plant a third in a prison and dreams of planting ten Lighthouses in the next ten years. Jon is looking for local churches who don’t mind having their space used to welcome those living life on the chaotic margins of society.

‘The church is often like a cruise ship—we keep people entertained, kept them on board. But it needs to be more like a rescue ship in a war zone, which uses its time and resources to rescue those broken by life,’ says Jon. ‘There are people who are lost. They need salvation. We’ve lost our confidence in what the gospel can do. Let’s go all out for the gospel, for those on the margins. The western evangelical church needs to rethink and regroup and become a church giving significant energy toward the broken and marginalised wherever they may be found. As the Father sent Jesus, Jesus has sent us. Yet this same Jesus empowers us with the Holy Spirit and equips us to live a life of radical love.’

If you’d like to find out more about Jon’s ministry, email jon.swales@stgeorgesleeds.org.uk, visit www.facebook.com/LighthouseWY, or follow them on Twitter at Lighthouse WY. This article originally appeared in the Autumn 2015 Trinity News.