While our baby was in the NICU

When a Trinity student and his wife unexpectedly find their newborn critically ill in hospital, they discover support from a Trinity community much larger than they’d realised.

Paul writes to the church in Corinth that ‘Because there is one bread, we who are many are one body, for we all partake of the one bread’ (1 Cor 10:17). We are reminded of this in the Communion liturgy at the breaking of the bread. This part of the liturgy has taken on a new depth for me as I reflect on the support that my wife, Hannah, and I received following the birth of our daughter.

Seeing our newborn in the NICU

The pregnancy was relatively straightforward and we were caught up in preparation: buying clothes, finding a pushchair, writing lists of names and whittling them down. We had eventually settled on a shortlist of boys’ names and just one girl’s name.

Just after our daughter was born, it was clear that things weren’t at all as they should be, and she was whisked away to be resuscitated. In that moment I asked Hannah if we should go with the name that we had agreed, but it just didn’t feel right. My wife suggested the name ‘Zoë’ as it was Greek for ‘life’. At that moment neither of us knew how ill she was nor did we realise how much the name Zoë would come to mean. Our daughter was rushed to the Neonatal Intensive Care Unit (NICU), and we were left waiting.

As first-time parents, we had been full of excitement and anticipation at starting the journey of parenthood, especially at the thought of new life and bringing our child home. However in an instant these dreams and hopes were whipped away from us. Expectations that we didn’t realise we had were dashed, and we were left asking questions. During pregnancy we were looking forward to holding our baby in our arms, and just after birth we weren’t sure if we would even get to have that moment.

As time passed, it became clearer to us that she was critically ill, but it felt like we were believing life for her, like a promise from God.

Things were touch and go for the first few days that Zoë was in NICU. The doctors didn’t mention whether she would live or die; it was the unspoken topic until we were finally told that it was a case of when Zoë came home and not if she came home. From that moment things began to get a little better, but there was still the roller-coaster of emotions each day when we left her in NICU and had to go home.

‘We who are many are one body.’

Something that carried us whilst Zoë was in NICU was the support of the Christian community worldwide. When it was apparent that things weren’t right with Zoë, we messaged the Trinity College community asking for prayer. We were overwhelmed by the messages of support and prayers that were offered from current and previous students at Trinity, many of whom we have never met. Over a year later we are still finding out the different people who were praying for us. We discovered that the Trinity College community extends far beyond the limits of the city of Bristol as people from all over the country and further messaged to let us know that they were praying.

The support that we received went further than prayer. Our cupboards were stocked, people came to do our washing up when it just felt too much for us, meals were provided from the college community and our church community. We received cards, letters, emails and texts from friends and family far and wide: some as simple as three X’s before bedtime to show that they were thinking of us.

We thank God for Zoë and the care we received. It is impossible for us ever to thank everyone for their support and love. The combination of everything, the big and the small, meant that we felt overwhelmingly loved and carried at that time. I am taken aback when I think of the support that the Christian community can show, and I am reminded of the fact that through Christ we are one body.

The band Athlete have a song called ‘Wires’, which was written about the birth of the singer’s daughter, who also spent time in NICU. When I hear it I think of Zoë’s time there. It concludes with the line ‘Looking at you now, you would never know.’ I think the same when I look at Zoë; so full of joy and life. 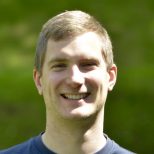 David Preece is a third-year ordinand from Guildford Diocese in the MA course at Trinity. He will be returning to his diocese for curacy.