How comfortable are you to teach and preach the book of Revelation to others? Read a Q&A with Tutor in New Testament Dr Jamie Davies about how you can approach this sometimes daunting and misinterpreted book.

Q: You have recently begun work on a commentary about the book of Revelation?

A: Yes, it’s going to be in the Reading the New Testament series, published by Smyth & Helwys in the US. It’s due out in 2020, so I’m at the early stages of writing it at the moment, but I am very much looking forward to getting stuck into it. I’ve started teaching a third year BA class on Revelation at Trinity this year, and it’s been great thinking through my ideas with the students. I will probably end up giving credit to them all in the book for the various ideas that are bubbling up in the classroom! This is part of what it means to be a learning community, and integrating research and teaching like this is something I always try to do.

Q: The interpretation of Revelation seems to have had a chequered history, to put it mildly. Why do you want to teach and write about it?

A: Well, yes, it’s certainly a fun field to work in! I have a great PowerPoint slide I always show in class, which contains a screenshot from a website whose ‘Armageddon countdown’ had reached zero days. It’s dated May 21, 2011. These things come and go all the time: just as I was starting this class, as it happens, there was another one of these ‘end of the world’ predictions coming from certain Christian groups in the US, based around a particular reading of Revelation 12 lined up with astronomy and contemporary politics. It can be easy to mock these sorts of things, though we should always remember that these people are our brothers and sisters. But there’s a serious point, too: these extreme and tragically mistaken readings of the book can lead to unhelpful or even dangerous practices, or they can lead us to stay away from Revelation altogether, and that’s a real problem.

I wanted to teach it this year not only because of my forthcoming commentary but because I honestly think it’s one of the most important books of the Bible for the church today. The key thing is that we learn to read it well. One of the books on the reading list for my course, written by an excellent scholar called Michael Gorman, is entitled Reading Revelation Responsibly (published by Cascade Books in 2011). It’s a great title that summarises what I am trying to teach my students and something to which I hope my own commentary will contribute. So often our readings of this complex and fascinating book are tied up in a deficient understanding of how ancient apocalyptic literature (which is what Revelation is, among other things) actually worked, how its imagery functioned. Without a proper ‘reading strategy’ we can get ourselves into all sorts of messes when we try to understand it. Imagine if you picked up a haiku and tried to read it in the same way you read the shipping forecast, or vice-versa! That illustrates what we sometimes do to Revelation. The key thing is to understand the nature of the imagery in these kinds of texts, and how that imagery is meant to work. I was saying in class the other day that the book of Revelation doesn’t just teach us what to think, it teaches us how to think. The imagery of the book reshapes the Christian imagination, as God shows us, from a heaven’s-eye-view, what the world is really like—so that we can live accordingly.

Q: Can you give an example?

A: Ok. Take the key idea of ‘victory’. It’s a major theme in the book of Revelation, coming up in all sorts of ways, not least in the repeated call for the seven churches of Asia Minor to ‘conquer’. We can too easily assume we know what ‘victory’ is, without allowing the imagery of Revelation to shape the idea for us. In Revelation 5.5, for example, John hears a voice saying ‘lo, the Lion of the tribe of Judah, the Root of David, has conquered’. But when John turns to look, he sees not a roaring Lion but ‘a Lamb standing, as though it had been slain’. The idea of a nationalistic and militaristic Lion is radically redefined (without being completely lost) by the vision of a slaughtered Lamb. The same sort of thing happens again in chapter 7, where John hears the census of 144,000 Israelite fighting men, but turns to see an innumerable multitude from every tribe and people and tongue. The expected victorious army of God’s people is transformed by the image of a multitude of martyrs, not clad in armour but wearing robes washed ‘white in the blood of the Lamb’. How does this imagery (a Lion that is a Lamb, an army that are martyrs) change how we view Christian ‘victory’ and ‘conquering’? How might that affect our understanding of the Christian life, of suffering, or—dare I say—of politics?

“Much of Revelation is designed to help Christians figure out how to bear witness to Jesus in their public lives when shown this ‘heaven’s-eye-view’ on Rome, and that’s how we should read it. Christians today need to learn to see our own political world through new eyes.”

Q: Is Revelation a political book?

A: Absolutely, yes, but again (and this is so important), not as we have often thought. Revelation isn’t giving us a timeline of 20th and 21st century world powers rising and falling, with images as codes for the names of future politicians, and so on. That sort of interpretation is tied in with those same deficient reading strategies. But that doesn’t mean it has nothing to say about ‘politics’. (Although in the ancient world ‘politics’ and ‘religion’ weren’t so neatly divided as they are in our world. Actually, I’m not so sure they are neatly divided in our world, either.)

Here’s an example: in the first century AD, the Roman Empire liked to depict its capital city as a beautiful warrior-queen, the goddess Roma, sitting serenely on a chair made from the weapons and armour of its defeated enemies. It was a very common image on coins and sculpture throughout the Roman world (similar personifications were used in the British Empire’s depiction of Britannia). It was how Rome wanted to be imagined by its subjects, and the imagery worked well. But when Revelation depicts Rome in chapter 18, she is not a queen but the harlot ‘Babylon’, dressed in gaudy attire and drunk on the blood of the saints. How did that purging and re-shaping of the Christian imagination change the way the early church thought about the dominant political power of their world? If they were being persecuted by Rome, it might bring an encouragement to persevere in their witness, knowing that Babylon will one day be judged by the Lamb—the one who really sits on the throne. But some Christians, of course, were quite comfortable, making money from Roman trade and enjoying the protections and provisions the Roman system brought them. For those Christians, the vision of Babylon would send another political message, and I suspect it was an uncomfortable one: ‘come out of her my people!’ (18.4).

Much of Revelation is designed to help Christians figure out how to bear witness to Jesus in their public lives when shown this ‘heaven’s-eye-view’ on Rome, and that’s how we should read it. Christians today need to learn to see our own political world through new eyes. And, dare I say it, when Babylon’s cap fits our own political systems, as Christians we need to prepare to act accordingly, even if that kind of discipleship proves costly. The book I mentioned earlier has a longer subtitle which I think says it well: Uncivil Worship and Witness: Following the Lamb into the New Creation. That’s what Revelation is about and why it’s so important we learn to read it responsibly.

Q: Can you recommend any further reading?

A: Well, in addition to Gorman’s excellent book, there are some other great resources out there. Richard Bauckham’s The Theology of the Book of Revelation (Cambridge University Press, 1993) is superb and accessible as an introduction to the theological issues. Another great introduction is Simon Woodman’s one in the SCM Core Texts series (2008). If you are interested in the radical politics of the book, and the Roman world behind that, I’d have a look at J. Nelson Kraybill, Apocalypse and Allegiance: Worship, Politics and Devotion in the Book of Revelation (Brazos Press, 2010). Another honourable mention on that front, from a different approach, is Brian K. Blount, Can I Get a Witness? Reading Revelation through African American Culture (Westminster John Knox, 2005)—and his longer commentary is great, too.

This article originally appeared in the Autumn 2017 Trinity News. 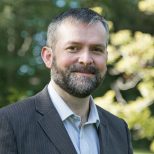 Dr Jamie Davies is Tutor in New Testament and Tutor for Independent Students at Trinity College. After spending two years in West Africa with Wycliffe Bible Translators, he served as a pastor in Glasgow, then completed an MLitt and then a PhD in New Testament from the University of St Andrews, where he also worked as research assistant to Prof NT Wright. Last year, T&T Clark released his book Paul Among Apocalypses? An evaluation of the 'apocalyptic Paul' in the context of Jewish and Christian apocalyptic literature for its Library of New Testament Studies. He is currently writing a commentary on the book of Revelation, which is due to be published in 2020.