Trinity Tutor in Old Testament Rev Dr David Firth discusses how Habakkuk wrestles with the difficulty of continuing to trust in God whilst living in a situation of ongoing oppression and injustice, with ideas as to how you might preach and teach this lesser known book.

For those unfamiliar with Habakkuk, can you provide a basic summary of the book?

Habakkuk, the eighth book in the minor prophets, is quite unlike any other book in the prophets.

For the most part, these are books which record God’s message to his people through the prophet, who functions as his messenger—most obviously when the prophet says ‘Thus says the Lord’. But we never find anything like this in Habakkuk. Rather, the book functions as God’s message by reporting the dialogue between God and his prophet. So, although it remains a prophetic book, it also works along similar lines to the Psalms.

Habakkuk is concerned with problems within Judah (see 1:2-4). God’s law has been set aside, and injustice dominates. Once the central issue is laid out in 1:2-4, much of the the rest of the book is presented as a series of dialogues between Habakkuk and God.

Having heard Habakkuk’s complaint, God responds in 1:5-11, indicating that he will address Habakkuk’s concern by bringing the Babylonians to Judah, even though they are ‘guilty folk whose own strength is their god’ (1:11). Habakkuk challenges God about this in 1:12-2:1, suggesting that God’s solution to the problem is worse than the problem that it solves. In this, Habakkuk models a pattern of prayer as complaint to God that is also about God, something that is not infrequent in the Old Testament. Having outlined his complaint, Habakkuk indicates that he will wait to see what God will say in response (2:1).

God’s response to Habakkuk (2:2-5) is perhaps the best known passage in the book, though also one of the most difficult to interpret. God suggests that faith in him is the right position to adopt, and in context this must mean both committing ourselves to God and also trusting that his solutions are the right ones. All oppressors will ultimately fall, though we do not necessarily know when that will be. Faith must mean trusting that God’s purposes are ultimately achieved, even though they might not be achieved within the lifetime of any one believer or generation.

All of this prepares for the final chapter, which is actually a psalm that receives a separate title from the rest of the book (though it is still associated with Habakkuk). The psalm is an expression of the worship that 2:20 had indicated was necessary. In the psalm, Habakkuk draws on a range of older traditions about God coming in power to his people, overcoming the forces opposed to him. All of this builds to the climax of 3:16, where Habakkuk realises he needs to wait for God’s action to come against those who invade Judah—a reference to both the Babylonians and those within Judah who would distort justice.

From this emerges the famous conclusion to the book, though it is a conclusion that really only makes sense when read in light of what has gone before. Habakkuk’s declaration about waiting hopefully for God in the midst of the apparent absence of blessing takes on real significance in light of his earlier complaint and the fact that he knows that oppression from the Babylonians is still to come. What it means in the end is that Habakkuk has realised that God’s justice is ultimately the thing for which we wait, and in the absence of blessing, it is God who gives him strength and lets him thrive even when flourishing seems impossible.

What are Habakkuk’s complaints to God?

Habakkuk’s complaints to God can all be understood as an expression of the issue of theodicy. That is, Habakkuk is struggling to understand how it is that God’s justice is to be seen as active and meaningful in a world that is full of injustice. This is slightly different from the approach to theodicy that is sometimes used today when we engage in apologetics with outsiders and try and justify God’s ways in the world. Rather, Habakkuk operates from a perspective of faith seeking understanding, faith that holds onto God but which also wants to be sure that faith is not something used to avoid hard questions. Comparatively few of us will ever have to face the sort of issues he did (corrupt government and violent invasion, with all that this implied), so it is important that we ground his complaint in this setting. The law was meant to safeguard justice, but if God’s own people could ignore it, what does this say about God? And how can we understand history as something ultimately under God’s control if God is prepared to use a people as violent and ruthless as the Babylonians? We only need to read the book of Lamentations after Habakkuk to appreciate how damaging they were.

The questions Habakkuk poses to God are thus very real, and these same issues continue to be raised today. Anyone who seeks to share their faith with people outside the Christian tradition will quickly encounter similar questions. Moreover, failure to grapple with issues such as these is often cited as a reason why people who do come from the Christian tradition no longer engage with faith. The book, however, is an important resource precisely because it addresses these issues. We effectively overhear Habakkuk’s testimony through the dialogues and in his closing prayer and declaration, and we see how someone who took these issues very seriously was able to resolve them. Habakkuk does not provide ‘the answer’ for believers, but rather the book serves as a model that demonstrates how we might address these problems—and the foundational element of that is prayer which raises these matters directly with God rather than treating them as abstract matters for discussion.

What can Habakkuk teach us about faith in God, and living in continued faithfulness to God?

Habakkuk has a great deal to teach us today. However, it is important that we let it teach us according to its own pattern. That is, it will not give any modern reader ‘three steps to solving the problem of theodicy.’ What it does instead is to model the sort of faith that God seeks. This is, in part, perhaps why the opening dialogue ends with 2:4-5 and its great declaration of the nature of faith, with the book then ending in 3:17-19 with Habakkuk himself embodying such faith.

The faith the book seeks is faith which comes to God and knows we have no life apart from God, but which also sees that faith in God means continuing to trust him even in circumstances of hardship.

Indeed, it is notable that when the New Testament takes up Habakkuk 2:4 it brings out both of these elements. Paul quotes this verse in Romans 1:17, and there he clearly emphasises faith as initial trust in God. By contrast, Hebrews 10:37-38 quotes it while emphasising the importance of continued commitment to God in Christ even when there is suffering. A biblical understanding of faith needs to hold these elements together, because we then see more clearly that faith is both that point at which we come to see our need of God in Christ, and also the way in which we continue to live that out.

In New Testament terms, faith is always connected to discipleship, and discipleship must be coming to Jesus and also continuing to follow him. Jesus pointed to the importance of taking up our cross and following him (Mk. 8:34), and to the very real possibility of suffering. In the temptations (Matt. 4:1-11) Jesus was in effect offered the chance to demonstrate his status as the Son of God without suffering, but this was not a path he would take. Although Habakkuk is not mentioned in this context, what Jesus demonstrates here is entirely consistent with Habakkuk’s message, and as Christ calls us to follow him in the way of the cross he demonstrates the faith that Habakkuk describes.

What advice would you give to someone about to teach or preach from the book of Habakkuk?

While Habakkuk is not often preached, it is an incredibly rich text that preachers would do well to consider. It is, however, a book where it is important that we hear the whole text. It is very easy to take 2:4-5 or 3:17-19 out of the larger context and hear them in a way that oversimplifies the message of the book. Only when we understand the very real suffering experienced by Habakkuk—both because of people setting aside God’s law and the threat of violent invasion—can we understand what these climactic passages are saying.

So, we probably need to preach this book in three sermons—the initial dialogues (1:1-2:5), the woe oracles (2:6-20), and then the prayer (3:1-19). In this way, we hear the whole book and let it model to our congregations the issues it addresses. Preachers will need, however, to hold back from the temptation to provide ‘answers’ to the problems it raises because although it stresses the importance of faith, in the end faith here is a pattern of life, not a trump card that we use to overcome otherwise challenging circumstances in life.

From our autumn 2018 newsletter. 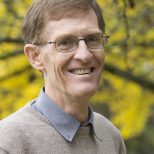 Tutor in Old Testament and Academic Dean at Trinity College

While completing his BTh at Morling College in Sydney, Australia, David felt a calling to participate in the global work of the gospel. He and his wife Lynne spent a year in the UK while David completed an MA (with a dissertation looking at poverty and wealth in Amos) at London Bible College. The couple then spent seven years in Africa working with the Australian Baptist Missionary Society, training local believers to take on the work there. David completed his PhD (on responses to violence in the Psalms) through the University of Pretoria while the Firths were working in Zimbabwe and South Africa. Through a long process, God led them to pastoral work in Sydney again and then to the UK, where David has taught Old Testament at Cliff College, St John’s Nottingham, and now Trinity College Bristol.