A Tale of Two Parks

This autumn, we’ve welcomed sixty-three new full-time students into the Trinity community. After a busy induction week, yesterday they began their first classes. Read one student’s thoughts as he embarks upon this new challenge and considers how God can use anyone, just as they are.

I had an amazing moment after moving to Bristol to study at Trinity. It was one of those moments where you know you’re in the right place doing the right thing.

A year and a half ago, whilst living in Gloucester, I took my young son on a bus ride. We decided to get off the bus in an area of the city we had never been to before, just because we spotted a small play park. It was a fairly dry but overcast day and the park, for the most part, was empty. I eventually ended up talking to another dad. We chatted politely about his work and the age and habits of the children, and eventually got on to talking about my job with the church. This led to conversations about what church is for and what things I did through our young adults’ group. He said that his wife had a church background, but he didn’t go, and she hadn’t been in a while. This might not sound like an exciting conversation to most of you reading, and it isn’t a story of leading him to Jesus in the park and seeing instant transformation. When I left I said quiet prayers for him and hoped that perhaps he saw church a little differently and would think about faith a little more. Fast-forward eighteen months to a large busy play park in Bristol. A man walks past me, turns, and says, ‘Are you from Gloucester?’ I told him I was, but was fairly confused as to how he might know this. He explained how we met and had a conversation in the small play park. He told me how he and his wife are going to church now, and that life is looking good. He isn’t living in Bristol, he was just passing on holiday and decided to stop in that park with his family. Included in this family cohort was an excitable women who I am fairly sure was his mother-in-law. She told me how exited they were to meet the man who had talked about faith to their son-in-law. They apparently had shared the testimony in their church how God used a stranger to bring him towards faith and the church. This left me immensely humbled and simultaneously incredibly excited about what God had in store for the next three years if this was our beginning.

So, here I am. Sweating in a lecture room with eighty other people all doing their best to be keen and look like they should be there. At least that’s how I feel. During various talks about timetables and formation my people-watching bug kicks in. I find myself looking around the room, imagining what people did before we all were sat in rows together. Were you leading some great expression of faith that most churches and vicars would dream about or are you one of the other types of people who actually had useful life skills that are helpful to society? Perhaps you are like me—you worked for a church but can’t claim to be a massive movement-maker, yet you are content that you helped people along the way. My mind then switches from the past to the future. Curiously observing others with their insightful questions and thoughtful-looking nods and I think ‘Could you be a bishop one day?’ or ‘I can see you leading a big church somewhere’. All completely unfounded of course as I don’t know who these people are. Even if I recall some of the hundreds of names associated with the hundreds of handshakes over the last few days it still doesn’t mean I know anyone. And so that feeling of knowing nothing starts to creep over me. Before I was seen as the pioneer-type person who should know how young adults should engage and react to life events and church programs. But that’s not my identity anymore. I start to feel lost in a herd of freshers. Of course I don’t show that to anyone. I sit looking chilled out on a chair smiling and the new faces smiling back at me. In truth, I feel I am moments away from crying and feel the weight and the soft burning that builds up behind the eyes. I know that I am mourning my previous life and apprehensive about the next stage. Then God gently speaks to me and reminds me that He chose me as I was to be in this place now. God didn’t give me a massive complex explanation of how he will change me, form me and use me. Although I know that there will be lots of change in me. He just said ‘Be you’. 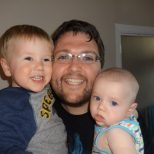 Tom Cook is an ordinand from Gloucester Diocese completing his Graduate Diploma in Theology, Ministry and Mission.