As a college, we fully support the ordination of women and are especially proud of those who attended and are attending this institution as part of their own journeys as well as those who are currently discerning their calling. However, while the church has come a long way since the first ordinations of women in the 90s, most women still encounter additional challenges in approaching ministry. We therefore intend to do all we can to support them through our culture and our training.

The “Women in the New Testament” course is a six part course, open to the entire community and is best described as:

“A conversation which equips students to engage deeply with the biblical case for women in leadership and to hear from women’s experience.”

The course which has recently been run for the second time, came about in 2021 when Josie Chamings, a second year ordinand and the *Women’s Rep at the time, noticed that there were many women in our community with stories where the Bible had been used to discourage their calling due to the comments of friends, family and acquaintances. This created a significant pastoral need and many of our ordinands admitted to feeling less well equipped in the biblical case supporting women in leadership. As an evangelical college, it was not enough simply to argue for women in leadership on the basis of justice or rights – we want our students to see how it is based on the Bible, whilst in loving dialogue with those who disagree.

As part of the Introduction the New Testament module, Jamie Davies (Tutor in New Testament, and Tutor for Independent Students) uses an exercise in which all the students sit in mixed gender groups to read 1 Timothy 2.8–15, with only the women initially allowed to speak. The aim in that lecture is to have the whole class appreciate how the interpretation of some passages has been experienced by the women in the groups and to hear the impact these texts have had on the lives of the women they were sitting with. This is often a significant “light-bulb” moment for many in that lecture.

Josie approached Jamie with the idea of putting together a course that might address these issues to better equip the community and he was excited to do so. Jamie was keen to create an environment that presented everyone as equals. It wouldn’t work if it were just a lecture by a lecturer, so the format, venue and timing was key. It was also important that it was a welcome environment for discussion and opposing views.

“When Josie asked me if I’d like to do the teaching element of this course, it was immediately clear to me that I had to say yes, even though I knew it meant I had to do a lot more research if I were to do the topic justice. It’s very important to me, as a male tutor, to advocate for all the fantastic women training for church leadership here at Trinity. More importantly, though, it was also a chance to share with my students — women and men — the tools, knowledge, and confidence to see that this position can faithfully be supported from the Scriptures. Researching and delivering these lectures was an immensely rewarding experience.”

The format was broken up into a few distinct parts: 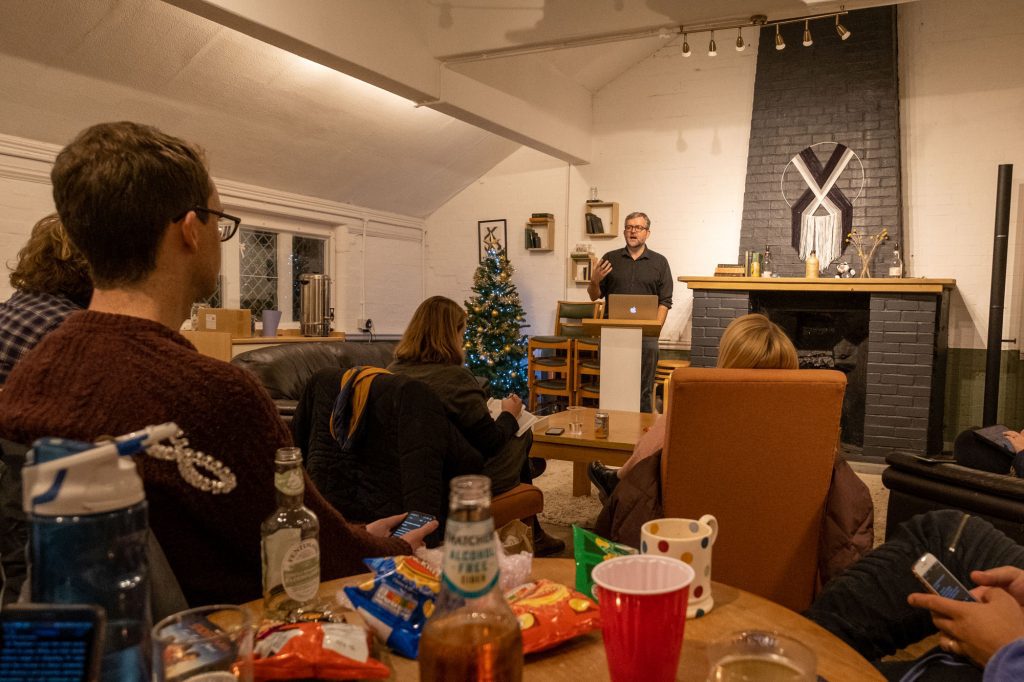 Jamie Davies presenting a talk in the Badgers Pouch

The course has been received extremely well by the community. Some have felt challenged by it and some feel more confident in how to talk about it with others.

“I came to Trinity because it was a place that was open to discussing these issues and it was really good to be challenged about not sitting on the fence.  Taking a stance either way sets us up to be better able to discuss the tricky issues by dropping the complacency that can come from neutral ambiguity. “

“It was inspiring and thought-provoking. Something the entire church needs to hear and learn from”

“I really loved this course and I loved that someone else had done all the theological heavy-lifting for me and that we got the reading list at the end. “

“I feel way more confident in my biblical understanding of this, and I feel I can support my wife even more fully in her calling. I’m looking forward to helping create a culture within the churches we will serve where women will not only be inspired to follow God’s call but that they would feel safe and encouraged to do so. – This should be made into a resource so all churches can teach it!”

Our hope is to equip folks to advocate for women in ministry on the basis of a solid and honest study of Scripture and to nurture a culture in which these topics can be discussed with grace and love at the centre. We’re hoping this course continues to be a staple part of our community activities each year.

*updated to reflect that the women rep role is not an elected student exec role but one of several new vital college job roles set up by the student exec in 2020-21.