The right to lead

Over the past few months I have been working on a new book about why people leave the Christian faith. I have met and interviewed a whole range of different people in their 20s and 30s who have left their faith for an array of reasons, and their stories are intriguing but they are also haunting. It’s very difficult to sit and listen to a stream of people share their disappointments with the Church and with God.

Time and time again, people have shared that one of the key issues contributing to their loss of faith is problems with church leadership. They use words like ‘judgemental’ and ‘hypocritical’ in their descriptions of church leaders. This deeply saddens me.

According to studies on generational characteristics, the overwhelming opinion of people in their 20s and 30s is that leadership must be earned. Their disillusionment is not solely with the Church but with government institutions too, who they feel have failed to earn the right to lead.

So how do we, as the Church, earn back the right to lead?

I recently spoke at a university Christian Union event, and the venue where it was held had Che Guevara’s imprint emblazoned on the wall. It fascinated me that more than 40 years after his death Che remains one of the few leaders who have become iconic figures alongside people like Mother Theresa and Martin Luther King Jr.

So what was it that inspired these students to see Che as such a heroic leader? Chatting to them further, I discovered they felt that he was a leader worthy of being emblazoned on their student union wall for a number of reasons:

Che was committed to a cause, a war against imperialism. He led a revolution and his final words of defiance were “Shoot, coward, you’re only going to kill a man” as he was assassinated in 1967. Che believed that “wherever death may surprise us, let it be welcome if our battle cry has reached even one receptive ear, and another hand reaches out to take up our arms, and other men come forward to join in our funeral dirge with the chattering of machine guns and the new calls for battle and for victory.” Che strived to start a whole movement toppling imperialism and pursuing Marxist ideals.

Ultimately, the students felt that Che earned his right to lead by living and dying for a cause he believed in.

But what fascinates me is how many of those same attributes are found in Jesus. Jesus is our revolutionary leader and he too gave his life but for a far greater vision. Jesus’ manifesto, summed up as he quoted from Isaiah 61, was “to preach good news to the poor …to proclaim freedom for the prisoners and recovery of sight for the blind, to release the oppressed, to proclaim the year of the Lord’s favour.” “Father, forgive them, for they do not know what they are doing” were some of the final words of defiance that Jesus spoke as he hung on a cross. He too was martyred by the superpower of his day, the Roman Empire.

John C Maxwell, in his book, ‘Developing the Leader within You’, unpacks five levels of leadership. He argues that basic level one leadership is about position. This is leadership in its most crude form. For example, you would follow what your boss tells you because of the boss’ position of authority. Level five leadership, however, which Maxwell categorises as great leadership, is about personhood: when “people follow because of who you are and what you represent.” One of the key characteristics of personhood leadership is that your joy comes from watching others grow and develop.

I think Che was a level five leader, and for sure Jesus modelled this kind of leadership. Jesus led in such a way that he longed for his disciples to grow and develop. So if we want to lead like Jesus then we need to earn it, and we need model his cause, his commitment and his integrity much more closely.

If we remain leaders merely in title, we will fail to communicate Christ effectively. But if we live lives that are flavoured with the very essence of our Saviour, we can make much better history than even Che Guevara in the name of Jesus. 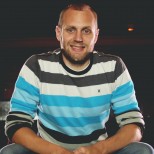 Andy is the Director of Share Jesus International, a trustee for Christian Surfers UK and a member of the Evangelical Alliance Council. He is married to Jo, is currently completing an MA in Applied Theology and is passionate about helping churches to develop rhythms of mission.