356
Home > Blog > Kingdom leading > The importance of being honest

The importance of being honest

In Gregory the Great’s The Book of Pastoral Rule (his incredibly contemporary treatise on pastoral ministry) he writes: “…those who preside over others should exhibit a type of behaviour that will lead the laity to disclose their secrets to them. Consequently, when the weak endure the waves of temptation, they will return to their pastor’s counsel as a crying child seeks its mother’s breast.”

To pastor people best you need to know what is really going on inside them: what’s behind the smiles on Sunday, their real doubts and fears and heart-aches. But what behaviour will rightly achieve this? As a pastor I’ve discovered it to be simply this: honesty about the ways in which I too find it hard to follow Jesus today. It’s that openness, more than anything else, that has encouraged others to open up to me and brought them to my door when they’ve been struggling to follow him too.

It took me years to learn this. I held back from sharing my struggles thinking they would undermine my ministry rather than enable it. I thought it would be wrong to ever bare my soul when preaching: my job was just to point my listeners to Jesus. I believed the lie that church leaders, like those who lead in the world around us, need to be all slick and shiny rather than real and gritty. Only once I did try a bit of honesty in the pulpit but was quickly told to “Stop being so hard on yourself!” I had nervously ventured to share only a little of the truth. I didn’t try again for a while.

Who changed my mind? Who gave me the courage to tell the truth? The apostle Paul. Time spent in his letters kept shocking me with how much ink he spilt talking about himself. And how much of his autobiographical material was simply him sharing his weaknesses so that he could point his churches to Christ’s strength. In particular, his letters to the believers in Corinth modelled a searing honesty about his ministerial struggles and sufferings for Jesus. I came to treasure the opening of 2 Corinthians where he shares the secret to his own pastoral ministry: to simply take the comfort he’d received from Christ in the midst of his sufferings and pass it onto others in theirs (2 Corinthians 1:3-4). It gave me new confidence as I too sought to share with others the things Christ had used to keep me going.

But the precise content of my sufferings I still kept quiet. Paul might seem to be a model of this: none of us know what the thorn in his flesh was (2 Corinthians 12:7). But then an older pastor beautifully led the way in being honest about his struggles in a way which showed me that you could both bare your soul and point people to Jesus at the same time. In fact doing the former could actually increase the impact of the latter.

So eighteen months ago I stood up in front of my church family at Emmanuel Bristol and was open and honest about something I had kept hidden for years. I told them about my struggles with same-sex attraction. And the only big response has been this: people responding in kind. My church family being increasingly open and honest with me.

I’ve just begun to grasp what Henri Nouwen learnt in his many years of pastoral care. That “…only he who is able to articulate his own experience can offer himself to others as a source of clarification. The Christian leader is, therefore, first of all, a man [or woman of course] who is willing to put his own articulated faith at the disposal of those who ask for help. In this sense he is a servant of servants, because he is the first to enter the promised but dangerous land, the first to tell those who are afraid what he has seen, heard and touched.”

Like many other pastors, I’ve loved reading the novels of Marilynne Robinson and her fictional (and yet incredibly accurate) take on our role. In Gilead the book’s narrator, Pastor John Ames, writes this: “That’s the strangest thing about this life, about being in the ministry. People change the subject when they see you coming. And then sometimes those very same people come into your study and tell you the most remarkable things.”

Want to share this experience? Well help those you serve to know that the pastor who sits in that study struggles just like them. By being honest about your own real doubts and fears and heart-aches. For then they will come knocking. Do that for long enough and they might even stop changing the subject when they see you coming – having realised, at last, that their lives are really no different to yours. 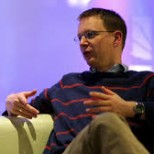 Ed is the pastor of Emmanuel City Centre in Bristol (part of a Bishop’s Mission Order) and is one of the editorial team at www.livingout.org. His first book The Plausibility Problem: The Church and Same-Sex Attraction is being published by IVP this month.