Giving a testimony in Trinity College chapel isn’t on my bucket list. It isn’t even on my list of things to do while I am at college. I am happy being quiet, looking thoughtful, and sharing ideas with a small group of others, but I felt God was quite insistent about this so here I am.

I’ll give you an insight into how my conversation with God went at this point.

I was born seven weeks premature and placed in an incubator. Apparently in my childhood I had an aversion to loud noises because when I would forget to breathe they had to hit the incubator really hard to make me begin to breathe again!

I caught an infection from the incubator, which transformed into gangrene in my large intestine. The medical term for this is necrotising enterocolitis. I was given antibiotics, but these did not work and so at about seven days old I needed an operation to remove the infected part of the intestine.

At the same time there were four other babies. Two responded to antibiotics, two died, and then there was me. There was an uncertain prognosis for the first two years of my life. There were concerns about whether I would have teeth and fingernails, but thankfully I stand before you with a full set of teeth and fingernails! The operation left a scar right across my tummy that I see every time I get dressed.

For most of my life this was an event that happened back in my life but didn’t really impact me, except that I am probably more prone to an upset tummy that most people. Then, when I began this journey of discernment, God really pushed me to engage with this event of which I have no recollection. I rely on the accounts of others to understand it, but it is part of my story.

As I spoke to my parents, researched the condition, and looked at statistics, I also spent a lot of time in prayer. The question I kept returning to was ‘Why me? Why did I survive when others didn’t? Why did others respond to antibiotics when I didn’t?’ I spent a long time in this questioning place. A long time. Until God revealed to me that I was asking the wrong questions, taking the wrong approach. The question ‘Why me?’ doesn’t get me anywhere, it just keeps me going around in circles. It sounds a bit trite, but if we convert our question of ‘Why me?’ into a statement, ‘Wow, me’, it transforms the way we see things.

Let’s be frank, in college we are asking the question ‘Why me?’ an awful lot. But if we go for the approach, ‘Wow, me — wow that God would chose me to live, to marry, to start a family, to lead his church….’ Well, wow.

I’m reminded that the resurrected Jesus appeared to his disciples with his scars. Thomas, who did not believe, was invited to touch those scars. The scars were a part of Jesus; they went on with him.

Friends, before you think I’ve got this all sewn up(!), there are scars that I couldn’t possibly share with you, that I am working through with God.

While there is the obvious physical scar from this, there were also some emotional scars. I had a tricky relationship with my parents at times — who doesn’t — my dad had depression when I was a teenager, our relationship as a family broke down for a time in my early twenties. The real restoration of this relationship began when he stood up in front of the church — like me, he doesn’t do that — and shared his testimony of God at work in my first week of life. Wow, me; Wow God!

So I’d like to invite you to try and do two things.

First, try to own the story of your scars. There is power in this. It is a journey, not a destination. It won’t happen because I’ve stood at the front of chapel and told you to do it.

Second, see what happens for you when you turn your ‘Why God?’ into ‘Wow, God!’

This was originally shared as a testimony in college chapel, Nov 2017. 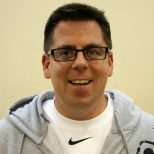 Dan Crouch is a second-year ordinand studying the BA Diploma from Bath and Wells Diocese. He completes his programme this summer, and will begin a curacy at St John the Evangelist, Highbridge.