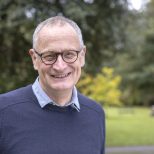 Tutor in Worship and Church History

Trinity has been a very important part of my life. I first taught on faculty from 1988 to 1999, then left to become the vicar of two parishes in the university area of Bristol. After just over a decade, I came back onto the staff of Trinity in 2010 to be Director of Anglican Formation and to teach Christian Worship.

Ordained ministry began when I was in my mid-twenties in Manchester. I completed my PhD shortly after first arriving to teach at Trinity. Over the years I’ve worked both at the edge and centre of life in the Church of England. In the 1990s, I was one of the pioneers of what became known as Alternative Worship, setting up an early form of Fresh Expression, when such things were looked on by senior clergy as risky and potentially dangerous!

Whilst an incumbent, I served on the General Synod and the Liturgical Commission and was the chair of Praxis, a training agency in Anglican worship. I spent a short time working in my home country of Wales, as Dean of Non-residential Training at St Michael’s College, Llandaff, where I was responsible for the formation of ordinands and LLMs for the Church in Wales.

I am married to Wendy Bray, who is an ordained priest in the Diocese of Bristol.

From my early days, pioneering Alternative Worship and through setting up two Fresh Expressions in Bristol, I have had a great interest in the relationship between worship and mission, particularly in the cultures of post-Christendom. As one of the compilers of Celebrating Common Prayer, I developed a practical interest in how the pattern of daily praying can shape Christian believers.

I believe in the importance of well-planned and well-led worship which enriches the worshippers whilst helping them address God in ways that come from the truth of who they are. Good worship enriches our humanity in Christ because it brings us up-close to the God who gives us life and sets us free.

1999 Alternative Worship in the Church of England (Cambridge: Grove Books).

1993 Something Understood: an introduction to ‘Celebrating Common Prayer’ (with Kenneth Stevenson and David Stancliffe) (London: Hodder and Stoughton).