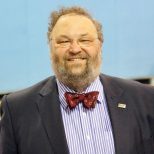 Revd Prof Steve Walton’s passion is to help others engage with the New Testament for themselves. He acts as a research supervisor for Trinity, and has supervised fifteen PhD students to successful completion across a wide range of areas in New Testament, and at the interfaces of New Testament and theology, practical theology, and Islamics. He has also examined forty doctoral theses covering a breadth of topics, including: Luke and Acts, the Gospels, Paul, Hebrews, the role of Bishops in the UK House of Lords, church growth, the interface of Islamics and New Testament studies, and hermeneutics. He welcomes enquiries from potential research students by email: steve.walton@trinitycollegebristol.ac.uk.

His major current research project is the Word Biblical Commentary on Acts. He has wide interests outside Acts, including the synoptic Gospels (especially Mark and Luke), New Testament theology, narrative approaches to the New Testament, the appropriation of the Old Testament in the New Testament, Greek language and linguistics, New Testament textual criticism, and Paul (especially, but not exclusively, 1 and 2 Thessalonians, Philippians, and Galatians), and the interfaces between New Testament and other theological disciplines. He blogs about New Testament Studies at Acts and More (http://stevewalton.info)

Steve is Secretary of the British New Testament Society, and has served on the steering committees of the Society of Biblical Literature Book of Acts and Biblical Lexicography sections. He also served on the Editorial Board of the Library of New Testament Studies series (Bloomsbury T & T Clark). He is a member of the SNTS (the premier international New Testament society), the Center of Theological Inquiry (Princeton, NJ), the Society of Biblical Literature, the Tyndale Fellowship for Biblical and Theological Research, and the Institute for Biblical Research.

Steve is ordained priest/presbyter in the Church of England, and has served on a church staff, in student ministry, advised people on God’s call with the Church Pastoral Aid Society, was a househusband, a bishop’s chaplain, and has taught at Bedford College, St John’s College, Nottingham, London School of Theology, and St Mary’s University, Twickenham—the latter two as Professor. He is married to Ali, who is vicar of All Saints, Isleworth in West London, and they live with their Border Terrier, Flora. Steve is a retired international volleyball referee and trainer of other referees, and was an Olympic torchbearer in 2012.

Leadership and Lifestyle: The Portrait of Paul in the Miletus Speech and 1 Thessalonians (SNTS Monograph Series 108; Cambridge: Cambridge University Press, 2000).

Poverty in the Early Church and Today–A Conversation with Hannah Swithinbank of Tearfund (Bloomsbury T&T Clark, 2019). This book is freely available online: https://tinyurl.com/poverty-book.

‘Why Silence? Reflections on Paul and Jesus Silencing Demonised People in Luke-Acts’ in Healing and Exorcism in Second Temple Judaism and Early Christianity (Mohr Siebeck, 2019), edited by Mikael Tellbe and Tommy Wasserman.

‘Identity and Christology: The Ascended Jesus in the Book of Acts’ in The Earliest Perceptions of Jesus in Context: Essays in Honour of John Nolland, edited by Aaron White, David Wenham and Craig Evans (Library of NT Studies 566; London: Bloomsbury T. & T. Clark, forthcoming 2018) 130-48.

‘Jesus, Present and/or Absent? The Presence and Presentation of Jesus as a Character in the Book of Acts’ in Characters and Characterization in Luke-Acts, edited by Frank E. Dicken and Julia A. Snyder (Library of NT Studies 548; London: Bloomsbury T. & T. Clark, 2016) 123–40.

‘Thinking it Through: Researching and Writing a Conference Paper’, ReflectED: St Mary’s Journal of Education 7 (2016): 3–5.

‘What are the Gospels? Richard Burridge’s Impact on Scholarly Understanding of the Genre of the Gospels’, Currents in Biblical Research 14 (2015): 81–93.

Recent transfer of knowledge to a wider audience