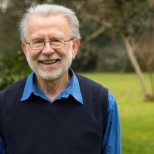 I am a long-time faculty member at Trinity, now semi-retired. I grew up in Australia. I came into ministry from a science background and was in parish ministry in a deprived area of Sydney. My doctoral work in Cambridge confirmed a love for the Gospels and took me to my first academic post at Regent College, Vancouver, where I was also heavily involved in leading an independent church. During my time in Bristol, I have also served as Vice Principal and Academic Dean at Trinity and as Visiting Professor at the University of Bristol.

I am passionate about discipleship: Christians living transformed lives that make them visibly different from their neighbours and church life that is a corporate version of the same. This is a multi-dimensional matter, but one of the important matters here is knowledge of and confidence in biblical and Kingdom values.

Experience is a great teacher: in an earlier stage of my life I was significantly formed by the challenges of taking care of a seriously brain-damaged wife for many years while raising a young child; into my second marriage I brought an eight-year-old son, and came to appreciate the huge challenge my wife was taking on as step-parent.

My wife, Lisa, is an activist heavily involved in research and advocacy, primarily in the realm of issues of sexuality. Our daughter is finishing a degree at St Andrews and our son is married and living in beautiful Vienna.

More recently my scholarly focus has broadened and to some degree re-focused, with investment in NT ethics, OT sacrifices (it connects!) and the Gospel of John, along with NT Greek syntax.

But my interests are broad and I ponder issues and supervise research on a wide front.

A farewell to Dr Justin Stratis

An interview with Donna Lazenby