At the start of the last academic year, seven students and Trinity Site Manager Dave Snell began work to reclaim an unused patch of land behind Henry Martyn House at Trinity.

They created sixteen allotments that could be used by students, who perhaps didn’t have space to garden near their flats or homes, or who had never grown anything before and wanted to give it a try.

‘Part of the joy of this has been seeing it begin from scratch—standing there last October and looking at brambles that were almost taller than me,’ says ordinand Ruth Phillips (pictured below, right). With Dave’s tools and help, the group dug up the ground and created beds. 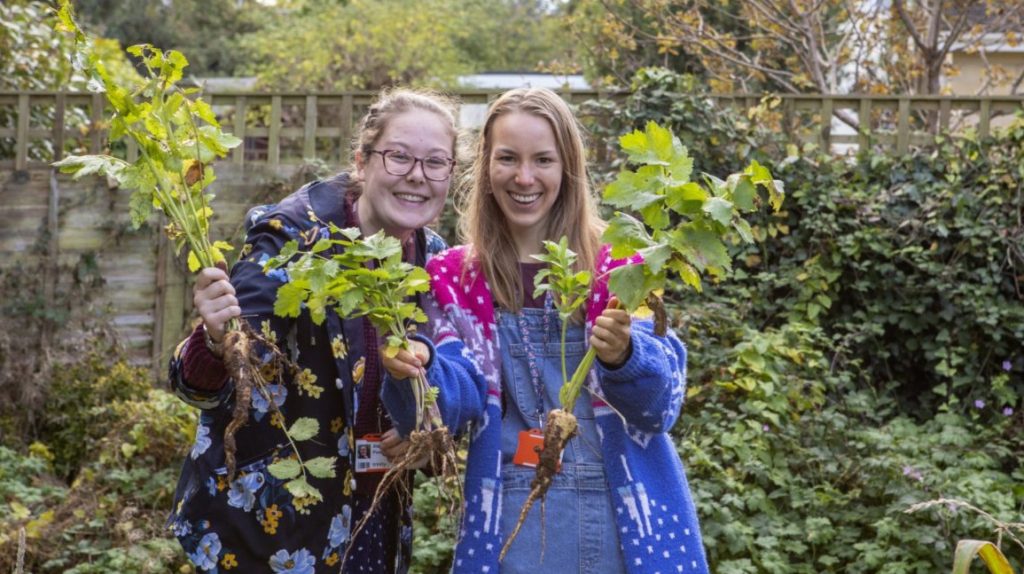 ‘We just dabbled, really,’ says ordinand Jon Ball, who led the initiative through his participation in the Student Exec’s Green Team. Students have tried growing runner beans, courgettes, tomato, corn, carrots, and potatoes so far. ‘Most of us went for the approach of just putting things into the ground and seeing what happened.’

Jon hoped through this initiative that students could garden together as a form of spiritual discipline, experiencing something of what it means to be reliant on the earth and its seasons. ‘In the last month or so we are getting results,’ he says. ‘It was a year’s worth of work for a courgette. It’s really rewarding, but an eye-opener to how long it actually takes things to develop. It’s a challenge to our consumer mindset.’

In addition to the new allotments, the Green Team worked last year to ensure that everyone at college brought only reusable cups for coffee breaks, and collected students’ views about the college’s food and site use to share as Trinity’s leadership works to make systemic eco-friendly changes.

This academic year, new students have joined in caring for the allotments, and a new plot will be given to Trinity’s Muddy Boots Day Nursery for the children to spend time gardening as well. ‘A community has sprung up around the garden,’ says Ruth. ‘We water and help watch and weed each others’ plants.’

As she worked in the allotments throughout the year—helping to clear brambles, plant seeds, weed, prune, and finally see fruit—Ruth felt God speaking to her about her own life. ‘I could feel God talking to me about what needed healing and pruning in my life. And as I saw stuff growing, God was talking about new growth in my life. We’re so disconnected from the land, but it’s part of who we are, as creation, to be connected to the earth. Gardening became part of the rhythm of my life at college, the place I would go to meet with God.’

Trinity College is looking for someone to join our staff as a Communications & Fundraising Manager.
Read more

Trinity College is looking for someone to join our staff as a Finance Manager.
Read more

Trinity College is looking for someone to join our staff as a Finance Assistant.
Read more

Trinity College is looking for someone to join our staff as an Executive Assistant to the Executive Director & Safeguarding Co-ordinator.
Read more